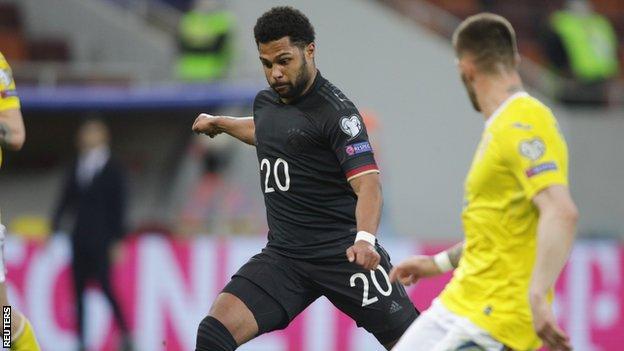 Since World Cup 2018, Serge Gnabry has been involved in 18 goals in 17 appearances for Germany – eight more than any other current Germany player

Gnabry also had a shot saved superbly by Florin Nita, who then stayed alert to deny Chelsea's Timo Werner.

Manuel Neuer bravely blocked an effort from Nicolae Stanciu late in the game.

The win in Bucharest means Germany sit at the top of the group on six points, above Armenia on goal difference. Next up for Low's side is a match at home to North Macedonia on Wednesday.

Torino captain Andrea Belotti, who started up front alongside Juventus forward Federico Chiesa, scored from the spot just before half-time after he was fouled in the area by Daniel Dimov.

Manuel Locatelli curled in the second in the 82nd minute to all but ensure victory. 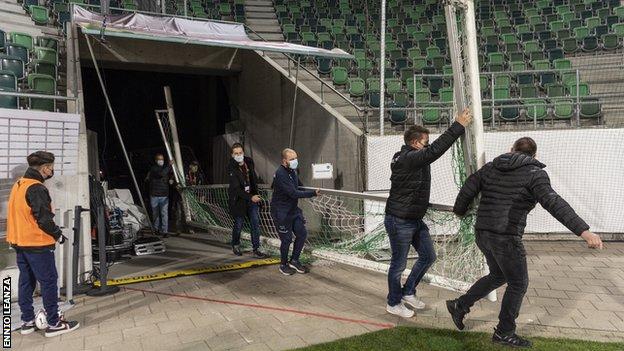 Goal rush: officials bring out replacement goals after finding one set on the pitch did not meet the right standards

Switzerland defeated Lithuania 1-0, but kick-off was delayed by 15 minutes because one of the goals was too big at St Gallen's Kybunpark Stadium.

Reports suggested the goalposts were too high on one side when inspected before the game by match officials. A police officer helped staff remove the goal, which was eventually replaced by a spare set.

The drama did not affect Liverpool's Xherdan Shaqiri, who scored what was to prove the winner after only two minutes.

Zlatan Ibrahimovic produced an excellent backheel flick to set up Sweden's opener in their 3-0 win in Kosovo.

The 39-year-old, who returned to international football last week, provided the assist for Ludwig Augustinsson's opener in the 12th minute.

Alexander Isak and former Sunderland midfielder Seb Larsson, from the spot, scored the other goals for Janne Andersson's side.