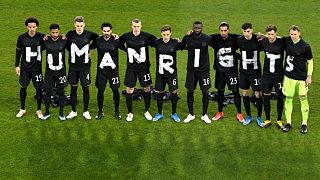 Germany’s national football team wore t-shirts showing support for human rights ahead of their qualifying match for the 2022 FIFA World Cup in Qatar.

The gesture came just one day after Norway’s players wore “human rights on and off the pitch” t-shirts before their match against Gibraltar.

FIFA had said that Norway would not be disciplined for its attempt to draw attention to labour rights abuses in Qatar.

FIFA’s disciplinary code states that players and federations can face disciplinary action in cases of “using a sports event for demonstrations of a non-sporting nature”.

But in a statement on Thursday, world football’s governing body said they believe “in the freedom of speech, and in the power of football as a force for good.”

Qatar, which controversially won the World Cup hosting vote in 2010, has been under scrutiny over laws and conditions for migrant workers helping to build infrastructure for the tournament.

Five of Germany’s players were from Bayern Munich, which has held training camps there since 2011 and is sponsored by Qatar Airways.

There has also been much debate in Norway over the tournament with several top-division clubs, including Rosenborg and Tromso, calling for an outright boycott.

FIFA’s World Cup regulations state that teams withdrawing from next year’s tournament can be banned from the 2026 edition, which will be hosted in the United States, Canada, and Mexico.

Both Germany and Norway won their opening qualifying matches 3-0.