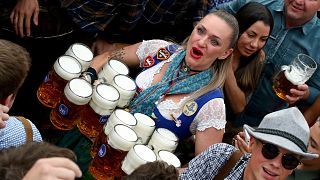 Germany’s Oktoberfest beer extravaganza, scheduled to bring together hundreds of thousands of people from September 18 to October 3 in Munich, has been cancelled for the second year in a row due to the COVID-19 pandemic, the Bavarian state leader announced on Monday.

The health situation remains too “uncerta in” for the “most comprehensive gathering of all” to be held in the autumn, Bavarian Minister-President Markus Söder said at a press conference.

Munich Mayor Dieter Reiter described the announcement as “bitter” but said that “it certainly does not come as a surprise to most”.

According to estimates, more than 6.3 million people visit Munich every year to attend the event.

Reiter said that although “a large part of the people in Germany and perhaps Europe” will be vaccinated by September,” the “pandemic worldwide will not be over yet” and that the risk that some people may get infected by COVID-19 during the festival “is simply too great”.

Germany is currently in the middle of a lockdown that includes a ban on large gatherings, with an infection rate of 146.9 new weekly infections per 100,000 residents.

Bavaria is slightly below the national average with 145.4 new weekly infections per 100,000, according to the country’s disease control centre, the Robert Koch Institute.

After Oktoberfest was cancelled last year, some 50 of the southern German city’s beer halls and other establishments hosted smaller parties under strict guidelines, and Mayor Dieter Reiter said the hope was that it again would be possible to have open-air beer gardens and patios open with certain restrictions.

It comes less than two weeks after the German parliament introduced a federal “emergency brake” legislation, which plans for a uniform set of restrictions to come into force in areas where the incidence rate is higher than 100 new infections per 100,000 inhabitants for three consecutive days.

These restrictions include the closure of non-essential shops, limits on household gatherings and a nighttime curfew starting at 10 pm.