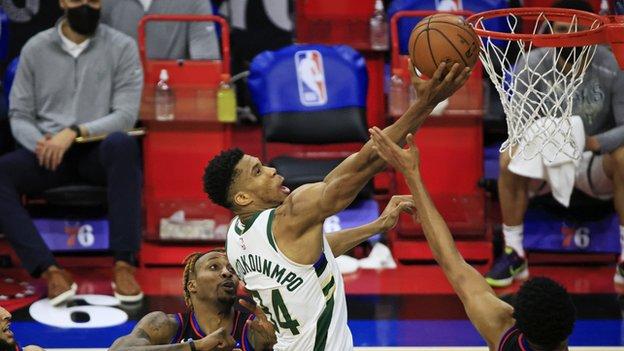 Antetokounmpo has been named the NBA's most valuable player twice

Giannis Antetokounmpo scored 10 points in overtime as Milwaukee Bucks came back from a 19-point deficit to beat Philadelphia 76ers 109-105.

He registered 32 points, 15 rebounds and five assists as the Bucks won a fifth game in a row against the 76ers, who had key player Joel Embiid missing.

"We played great defence, trusted one another, didn't put our head down, kept our composure," said Antetokounmpo.

"We believed in ourselves, and that's why we were able to come back."

Elsewhere, James Harden hit a 40-point triple double as the Brooklyn Nets joined the 76ers on top of the Eastern Conference with a 124-115 victory over the Indiana Pacers.

"It's not even about the triple-double, it's about our effort," said Harden. "Especially that second half we did an unbelievable job defensively, just getting after it. That's it."

The Golden State Warriors lost Stephen Curry to injury in a 108-94 victory over the Houston Rockets.

Curry, who missed nine of 11 three-point attempts, scored 18 points and eight assists before a fall which left him limping to the locker room at the end of the third quarter.

The Dallas Mavericks were also comfortable winners as they eased to a 105-89 victory over the Los Angeles Clippers.

Luka Doncic scored 42 points for the Mavericks, his fourth game with at least 40 points this season.