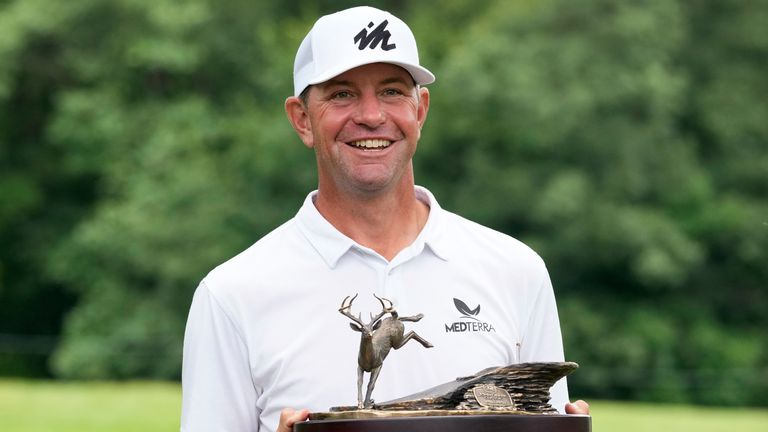 Lucas Glover fired a seven-under 64 to earn a two-shot victory at the John Deere Classic and secure his fourth career PGA Tour title but his first in 10 years.

Glover, 41, carded eight birdies against just one bogey, including five birdies over his final seven holes, to finish at 19-under 265 on the TPC Deere Run course at Silvis in Illinois.

Kevin Na and Ryan Moore tied for second at 17 under, with Adam Schenk, Luke List, Scott Brown and Colombia’s Sebastian Munoz tying for fourth place at 16 under.

Glover, the 2009 US Open champion, said: “The focus starting out was aggressive, make as many birdies as possible, and then see where we are come middle of the back nine if it’s going well. That’s kind of what happened.

“Once I got to 14 after making a few birdies, it was, ‘Alright, let’s get this to 20 under and see if that’s good enough’. I think that enabled me to stay aggressive and not get too nervy, because I had a personal goal. I thought that’s what I needed.”

Glover won the 2009 US Open but went into this tournament ranked 115 in the world after claiming his last win at the 2011 Wells Fargo Championship.

Japan’s Nasa Hataoka was declared the winner of the Marathon LPGA Classic after the LPGA Tour announced on Sunday that unplayable weather conditions had forced them to shorten it to a 54-hole event.

Hataoka, the US Women’s Open runner-up, was 19-under 194 through three rounds (61-69-64) at Highland Meadows Golf Club in Sylvania, Ohio, and finished the tournament with 24 birdies against five bogeys.

The 22-year-old was six shots ahead of American duo Elizabeth Szokol and Mina Harigae on 13 under. 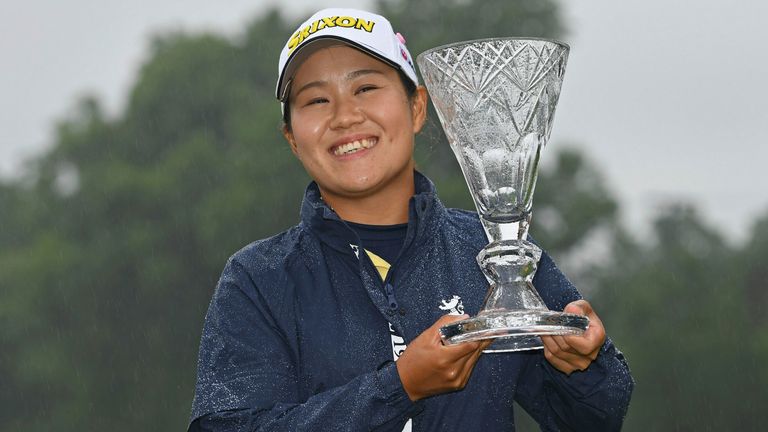 Germany’s Esther Henseleit was fourth at 12 under, and Yuka Saso of the Philippines, Amy Yang of South Korea, Caroline Masson of Germany and Austin Ernst tied for fifth at 11 under.

The LPGA initially moved up Sunday’s tee times with the weather forecast in mind but play had to be suspended at 9:40am local time due to heavy rain which kept the players off the course for hours before the LPGA made an announcement at around 4pm.

“Course conditions have not improved at the @MarathonLPGA and it remains unplayable,” the LPGA tweeted. “Finishing the tournament tomorrow is not an option due to an unfavourable forecast. The tournament will be reduced to a 54 hole event with Nasa Hataoka as the winner!”

Meanwhile, Saso, who defeated Hataoka in a play-off to win the US Women’s Open, has pulled out of the LPGA Tour’s next major, the Evian Championship in France later this month.

Jim Furyk held off all challengers and some severe weather to win the US Senior Open by three shots at Omaha Country Club.

The 51-year-old took a four-shot lead into the final round after shooting a third-round 66, despite several delays and complications due to severe weather in the area.

He then carded a one-over 71 on Sunday to finish on seven-under 273, with Canadian Mike Weir (67) and Retief Goosen of South Africa (69), tying for second place. 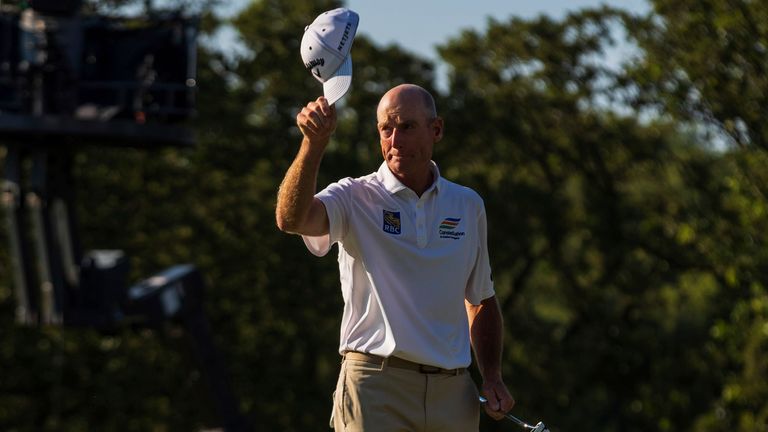 Jim Furyk salutes the crowd after winning the US Senior Open

When Weir eagled on the sixth hole, Furyk might have been feeling him closing, but subsequent bogeys by the Canadian on the eighth and 10th gave Furyk some breathing space after he had bogeyed the second and double-bogeyed the third.

Furyk, the 2003 US Open champion, then rallied with birdies at the sixth, 13th and 16th to become the eighth player to win both the US Open and US Senior Open.

Australian Rod Pampling finished fourth on three under with Germany’s Bernhard Langer tying for fifth on one under with American Kevin Sutherland.

Spain’s Miguel Angel Jimenez was joint-eighth on one over, while Englishman Paul Broadhurst finished tied-28th at eight over, one ahead of Northern Ireland’s Darren Clarke, with Scot Colin Montgomerie joint-34th on nine over.

Marianne Skarpnord made six birdies on the back nine to force a play-off with Thitikul Atthaya which she won to claim the Aramco Team Series event.

The Norwegian was five strokes off overnight leader England’s Georgia Hall at the start of the final day and recovered from three bogeys during the first nine holes to regain her composure for a tilt at the title.

Skarpnord had to hold her nerve on the 18th but saved par to finish on 13 under along with Atthaya to force a play-off that she then won on the fourth hole with a birdie to claim success at Centurion Club.

It was almost a double too because as well as the individual competition, the players’ scores were also being entered in a team event.

The players were in teams of four featuring three professionals and one amateur and Skarpnord’s team finished second behind Olivia Cowan’s group, who ended on 41 under and won by three shots.

Hall, the overnight leader, saw her hopes of a late charge ended when back-to-back birdies at eight and nine were followed by bogeys at the 12th and 14th.

She finished on 11 under after a par score of 73 which saw her place fourth behind compatriot Charley Hull, who enjoyed a terrific front nine with four birdies.

It moved the Kettering golfer, who is ranked 44 in the world, into contention but she had to settle for third after carding 68 to end on 12 under. Meanwhile England’s Alice Hewson finished tied for sixth.

Marcel Siem returned to winning ways by securing a one-stroke victory at the Le Vaudreuil Golf Challenge, and with it a place in The 149th Open.

The 40-year-old German birdied two of the last three holes to card a four-under 67 to finish one clear of Chile’s Hugo Leon to claim a maiden European Challenge Tour title and first professional win since the 2014 BMW Masters in China.

“The last three years have been hard,” he told europeantour.com. “My golf was always there I just didn’t believe in it. I have a new mental coach, a completely new team around me and under new management. I think they have changed a lot.”