Simon McGonagle has been disqualified from racing for nine months at a
referrals hearing of the Irish Horseracing Regulatory Board; Head lad found
responsible for taking the photograph that led to trainer Gordon Elliott’s suspension 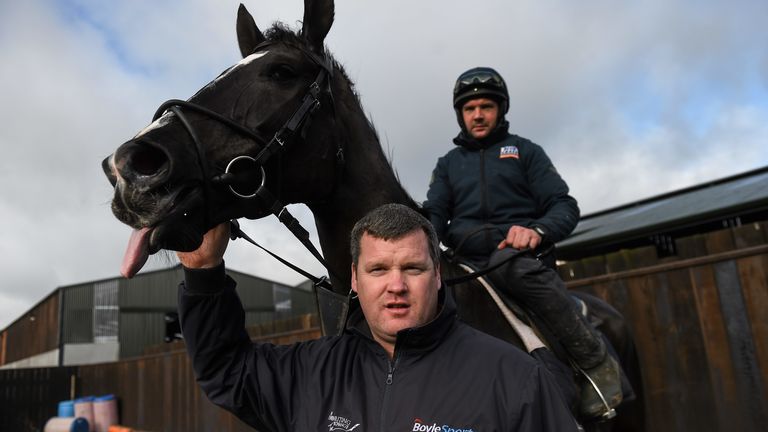 Simon McGonagle, stable employee to Gordon Elliott, has been disqualified for nine months, seven of them suspended, for taking the photo of the Irish trainer sitting on a dead horse.

At an Irish Horseracing Regulatory Board (IHRB) referral hearing on Friday, McGonagle, who was first employed by Elliott in 2007, was found to have damaged the integrity of the sport.

The sanction is set to take effect from April 19.

Elliott was banned for 12 months with the last six months suspended for bringing the sport into disrepute.

During the (IHRB) investigation, it was confirmed McGonagle, a head lad, took the photograph, which first came to their attention on February 27, that incriminated Elliott.

Evidence was heard from McGonagle and Denise Foster, who is holding the licence at Cullentra House Stables while Elliott serves his suspension.

The committee heard McGonagle did not contest he took the photograph, that he captioned it and disseminated it to five friends. This ultimately led to the photograph becoming public from an unknown source.

He accepted that “by virtue of his actions he was part of a chain of events that has caused damage to the integrity of racing and he fully understands the outrage expressed in relation to this image”.

The referrals committee found McGonagle had acted in a manner which was prejudicial to the integrity, proper conduct and good reputation of horse racing.

In their findings, they concluded: “We will not repeat what has been said before about the awful image at the heart of this case. The taking of the image was ill-judged and in bad taste and we consider that Mr McGonagle should have known better as a head lad involved in the industry for a considerable time.

“As head lad he should also show a good example to others in the yard. However, we reiterate the points made in the Elliott case that this incident is not concerned with cruelty or horse welfare. Also, having heard the evidence in this case we are no further on as to how this image came into the public domain and we can reach no conclusions on that issue.

“We reach the sanction having considered all of the circumstances, aggravating and mitigating factors, bearing in mind the seriousness of the offence and the need for deterrence, and considering Mr McGonagle’s personal circumstances, in order to reach a proportionate result.”