Joost Luiten fired a hole-in-one on his way to grabbing a share of the lead after a low-scoring opening at the Gran Canaria Lopesan Open; Max Kieffer, Joachim B Hansen and Robin Roussel also on seven under – watch live on Friday from 2pm on Sky Sports Golf 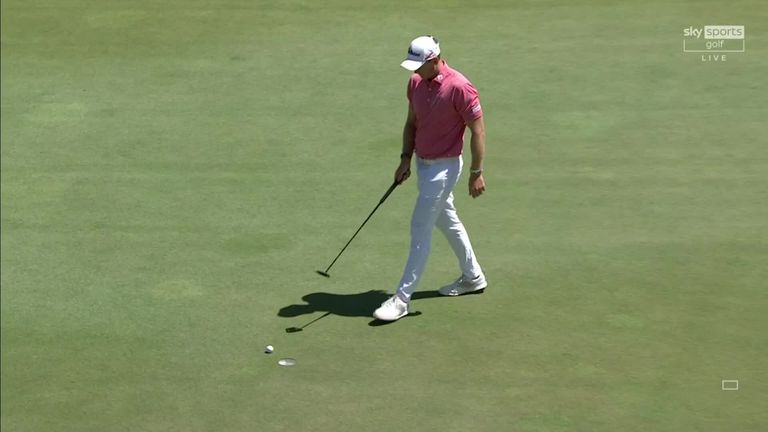 A look back at the best of the action from the opening round of the Gran Canaria Lopesan Open at Meloneras Golf.

Max Kieffer bounced back from his recent play-off disappointment to grab a share of the early lead at the Gran Canaria Lopesan Open.

The German, who put three balls in the water on his way to losing to John Catlin in extra holes at the Austria Golf Open on Sunday, carded an opening-round 63 on the par-70 at Meloneras Golf.

Kieffer is one of four players tied at the top of the leaderboard after a low-scoring opening day, with Joost Luiten, Joachim B Hansen and Robin Roussel all also on seven under. Luiten played the five par-threes in a combined five under – including a hole-in-one at the par-three 15th – while Hansen mixed an eagle with five birdies during a bogey-free start to the week.

“It was a perfect number for me to hit a wedge,” Luiten said. “It’s tucked just over the bunker but you can use the slope, right to left, I pitched it on the slope with a bit of spin and it went in. It’s one of these bonus things that happens sometimes, it’s always nice to make a hole-in-one.”

Kieffer birdied five of his opening six holes and recovered from a double-bogey at the eighth to pick up shots at the 11th and 13th, before closing out his blemish-free back nine with successive birdies.

English trio Ben Evans, Richard Bland and Matt Ford sit in the group a shot off the pace that contains Scotland’s Scott Jamieson, while Wil Besseling, Julian Suri and Alejandro Del Rey complete the large group on six under.

Tournament host Rafa Cabrera Bello bogeyed his final hole to card a five-under 65 and sit in the group tied-12th that also includes Eddie Pepperell and former Ryder Cup winner Jamie Donaldson, while Andy Sullivan – the highest-ranked player in the field – stuttered to an opening-round 70.

“I have been saying it all week that it is a pleasure to have the European Tour back in the Canaries and for someone that was born here, raised here, and I come as often as I can, I always tell everyone how nice it is here,” Cabrera Bello said. “I am glad we get the opportunity to showcase it to the rest of the world.”