With its stunning Moorish palace and fortress complex that is the Alhambra, the city of Granada knows all about creating history.

Around 2.7m people – more than any other attraction in Spain – visit every year but lately it is the unexpectedly successful football club that has been the focus of the city.

On Thursday Granada will look to make their own bit of history when Manchester United, one of the richest clubs in the world, call in on the wonderful Andalusian city for an appetising Europa League quarter-final.

On the verge of its 90th birthday, Granada FC is a mere whippersnapper when compared to the magnificent 800-year-old edifice that dominates the city. But that is not to say it hasn't gone through its own trials and tribulations, especially in recent times.

The club was bought by Chinese businessman John Jiang and his DDMC Group in 2016 from the Pozzo family (owners of Watford and Udinese) and his arrival coincided with the hiring and firing of no fewer than six different coaches in less than two seasons.

Among those who went through the managerial revolving door was former England international Tony Adams, who left the club with the unwanted distinction of failing to gain a single point in seven games in charge.

His biggest contribution actually came as he was leaving after relegation from La Liga. During that 2016-17 season 39 players from 21 different countries were used over the 38 games. Adams' advice to Jiang was to look to Spain to rebuild the club. They took it on board.

In came ex-Rayo Vallecano and Jerez director Antonio Fernandez as the club's general manager, while former Villarreal executive Antonio Cordon took charge of the team's transfer policy. The emphasis changed from bringing in expensive, international youngsters on loan from big clubs to signing experienced Spanish players who knew what it felt like to battle in the lower levels of the Spanish footballing pyramid.

Despite that change in approach, they still frittered away the parachute payments they had received following relegation and although they had established some kind of mid-table stability in their first season in the Segunda Division, it was the arrival of Diego Martinez that proved to be the real game-changer. The former Osasuna head coach made all the difference as he led Granada back into the top flight at the first attempt.

Many of the players who earned promotion stayed and then, to the consternation of every football fan in Spain, on 27 October 2019, a 1-0 home victory against Real Betis put Granada top of La Liga after 10 games.

It was never going to last of course and was swiftly followed by three defeats, but the impetus from that early start set the foundations for a season that would see Martinez and his side battle to a historic seventh place and a place in Europa League qualifying.

Their European progress means that Granada, with one of the thinnest and least-heralded squads in Spain's top flight, have played 47 games this season. This has meant a match every 4.36 days since the campaign began.

The unexpected success has come at a club whose total salary budget is around 56.5m euros (£48.7m), a figure that would probably just about cover Manchester United's annual wage commitments to David de Gea, Paul Pogba and Anthony Martial.

A coach destined for the top? 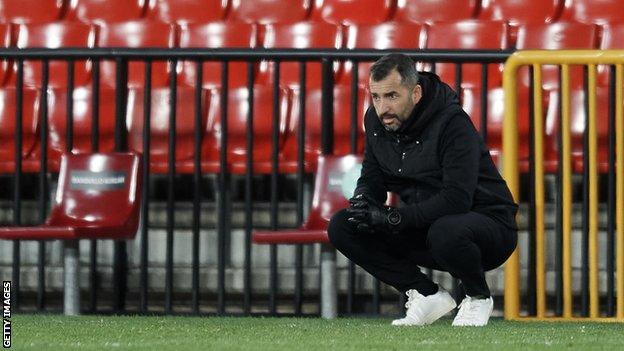 Martinez, 40, is a delightfully affable and approachable manager who retired from playing at 20 and cut his coaching teeth in Spain's lower leagues before becoming Unai Emery's assistant at Sevilla.

He moved to Osasuna but failed to get them into the promotion play-offs and paid for it with his job. These days he shrugs off such moments of adversity as just something that is part of football.

Despite coming from Vigo, 1,000km away and a city with a different way of looking at life to Granada, he arrived in Andalusia knowing exactly what the city was like – his wife is from there and he had studied at the local university.

When you get given the chance, the weather and culture mean it is difficult to turn down the chance to live there. "When I heard from the club, I told my wife: 'I got the call, we're heading home!'" Martinez tells the BBC.

His success has been built on his ability to get those at the club to buy into his philosophy. Fans can't help but enjoy a team that is not afraid of anything.

His philosophy is a system based on hard work, solidarity and team unity – it is an adventure they all want to be part of. All this coupled with an attention to detail and unfaltering support and loyalty towards the players he has available to him has created the perfect mentality and atmosphere in the Granada changing room.

He does not consider himself to be the star of the show but rather one part of a collective effort.

"I have always believed every team should be like a made-to-measure suit," explains Martinez. "Yes, I have my ideas and I can prepare the team in different ways, but the most important thing is the players you have at your disposal and to work out what we need to do to get the most out of what we have available."

His recipe for success is disarmingly simple. "You need intelligent players who believe everything is possible. What I don't like are excuses, " he says. "In my career if I had moaned all the time about what I didn't have available to me I would never have been able to coach, even at Segunda B level."

Free transfer Roberto Soldado is 35, just five years younger than the Granada boss. The former Real Madrid, Valencia and Spurs striker has found a new lease of life at Granada and says of his manager: "If Diego told us that to win a particular game we had to jump off the sixth floor of a building I am convinced that more than one person would do it because we believe so much in what he tells us."

Who are his major players at Granada? 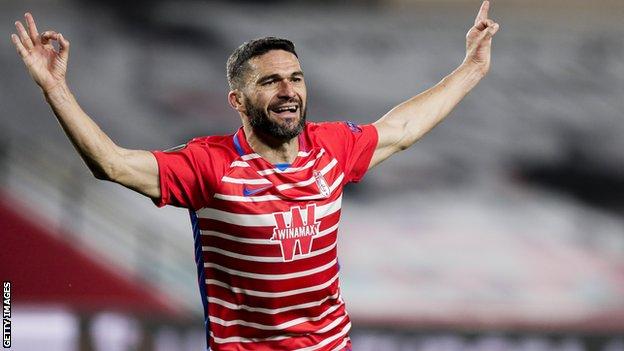 Soldado is one of the few 'big-name' players and is enjoying an Indian summer in the latter stages of a hit-and miss-career. But he is a mere youngster compared with 38-year-old Jorge Molina, who plays up front alongside him and who has signed a contract that will keep him at the club until his 40th birthday.

Chelsea fans may remember the young Brazilian winger Kenedy, who is finally looking like the player many experts knew he could become.

The Portuguese goalkeeper Rui Silva has attracted the attention of many bigger clubs this season, while Manchester City loanee Yangel Herrera is the rock in the Granada midfield, perhaps the La Liga player who is the best at timing their runs into the box.

Despite the unprecedented success they have been enjoying, off the pitch things are not quite so upbeat.

Cordon is now director of football at Real Betis and there are strong rumours to suggest Fernandez's days at the club are numbered.

And even the future of talismanic manager Martinez, whose contract finishes this season, is in doubt as other clubs want his signature.

A social media campaign has begun in Granada to try to persuade him to extend his deal. But for the time being, he says: "While not discounting coaching at a bigger club in the future, whenever I have been coaching at whatever level, it has never been with a view to looking towards the next step but rather to prepare myself for whatever battle we might be facing in the immediate future.

"And that is how my career has progressed. I have never done a job thinking about what the next job might be."

But when pressed about his future he says: "Who would have said that I would have been coaching in the first division at the age of 40? I don't spend a lot of time thinking about it but who knows what opportunities football can give you so you could achieve that dream?"

But that's for later. For now, there is the small matter of one of the richest clubs in the world calling in on one of the most beautiful cities on earth, with European glory still a distinct possibility.

Shooting the Tiger King: Watch as Louis Theroux revisits the now famous Joe ExoticMeet the Khans: Step inside the fast-paced, fabulous lives of the Khans
Source