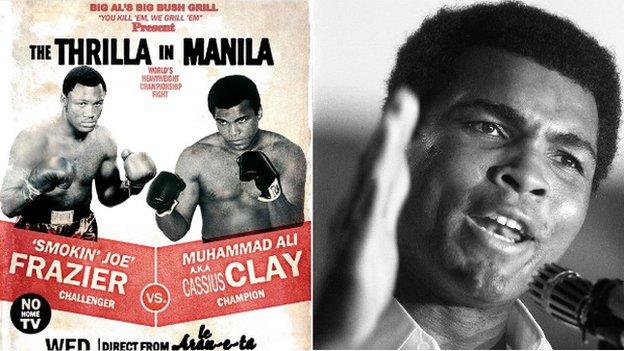 "When I saw the punches being thrown, I said to myself they should abolish boxing because that was a killer fight."

As Muhammad Ali and Joe Frazier started throwing punches before 11am on a sweaty morning in the Philippines, Gene Kilroy had a closer look at the 'Thrilla in Manila' than most.

He stood in Ali's corner, shouted messages from ringside and later watched his friend and employer – who should have been celebrating – sit battered and bruised in his hotel room.

Ali simply said the 14 rounds felt "like death". Frazier, swollen and unable to see from his left eye, felt he hit his rival with "punches that'd bring down the walls of a city" and yet he was left contemplating defeat.

Greatest Fights: The Thrilla in Manila 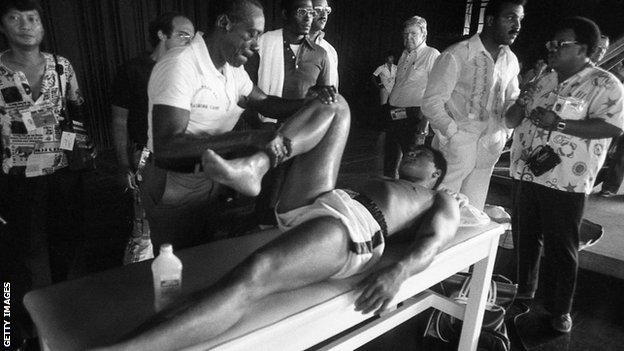 Kilroy, one of the only surviving figures from Ali's team on that morning in 1975, tells the Greatest Fights podcast the ferocity of what played out made him "think" about the nature of the sport.

Ali made some $9m (£4.4m in 1975), Frazier around $5m (£2.45m). The conditions ensured they earned every dime as estimated temperatures of 43C under the glass roof of the Araneta Coliseum served to all but cook both men.

"I made sure we had enough ice in the corner to keep Ali going," Kilroy recalls. "The pillars in the venue were sweating it was so hot."

Ali faced a different kind of heat in the build-up. His choice to introduce Veronica Porche as his wife to Philippines president Ferdinand Marcos prompted Khalilah Ali – his actual wife – to fly in and "raise hell" according to Kilroy. "All hell broke loose," he recalls.

Kilroy had grown used to the "challenge" of chaperoning the most recognisable sportsman of his era.

"I had to chase them away – the hustlers," he says. "Everyone wanted to haul Muhammad here or there and everyone had a gameplan. If Ali went to the bathroom he was the type of guy to come out with two new friends." 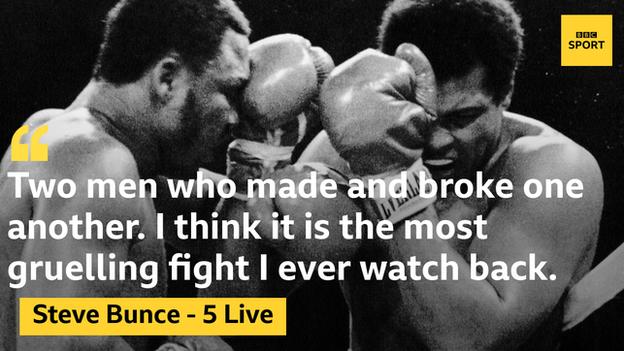 While Ali had faced some turmoil, Frazier trained meticulously for a fight against a man he had grown to detest. Too much had been said – some of it deeply personal – across their two fights to date.

Each with a win to their name, the blows in fight three looked heavier than ever before. Frazier looked to sap Ali by working the body hard. A member of his team had simply instructed: "Hit him on the hips, hit him on the legs. You hit him anywhere."

Legend has it that seven rounds in, Ali whispered to his rival "Joe, they told me you was all washed up" to which Frazier snapped: "They lied."

"For me it is the greatest, most compelling rivalry in all of sport," says BBC Radio 5 Live Boxing's Mike Costello as he watches round eight, where the pair trade punches as if failure is simply not an option.

"Nothing matched what was involved with Ali and Frazier." 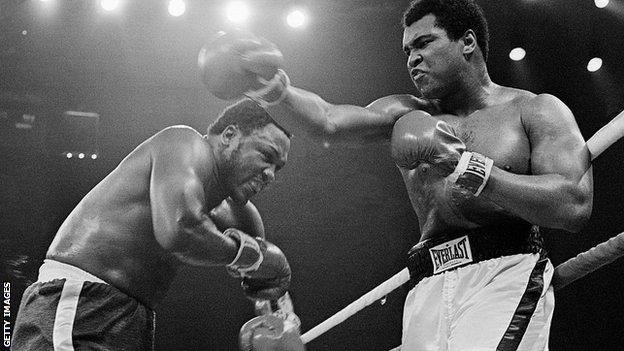 A morning contest ensured some 68 countries would be able to tune in for the trilogy fight. Closed-circuit venues across America meant the fighters earned the money befitting of such occasion.

Those watching saw Ali begin to land with worrying regularity late in the fight. Frazier, spitting blood from his stool between rounds, took punches he simply could not see as his left eye closed more and more.

And yet Ali is close to quitting. His reserves are depleted. In the 14th, he digs deep to produce one of the key attacks of his 21 years in the professional ring. It is enough to prompt decision in one corner.

"It's all over," trainer Eddie Futch told a protesting Frazier on his stool before the final round could begin. "No-one will forget what you did here today."

"Then everyone went in the ring and started jumping on Muhammad," says Kilroy. "Some people said he fainted but he never did.

"We went back to the hotel room and watched TV. His hands were sore and his body was sore. Can you imagine taking a beating like that? Think how Frazier must have felt."

'Would you do anything differently?'

"Two men who made and broke one another," BBC Radio 5 Live Boxing's Steve Bunce says as he reflects on the Manila night. "I think it is the most gruelling fight I ever watch back."

Ali died in 2016, aged 74. Arguably the most charismatic sportsman to ever live spent more than three decades battling Parkinson's disease.

When Kilroy met with Ali on his 69th birthday he recalls witnessing his friend shaking.

Kilroy adds: "Then he whispered and said 'Gene, didn't we have a lot of fun?'

"He said 'would you do anything differently?' I said no I wouldn't and he said 'me neither'. I have been blessed to be around him.

"You can't blame the disease on boxing. People said to him 'look what boxing did to you'. He said 'boxing made a lot of poor people a lot of money. When I fought everybody made money, I put a lot of people to work'. That's how he looked at it."

Ali fought four times in a year after his third war with Frazier, a sign of the times in an era where heavyweight greats went to work in order to cement legacies.

Almost 45 years later, shoppers frequent the aptly named 'Ali Mall' next to the arena where he gritted out one of the sport's most captivating wins.

"It is the greatest heavyweight fight in my mind that we have ever seen," Costello adds.

Bunce replies: "Sometimes we get accused of living in the past. When the past has fights like that, you have to live with them."

The Fight of the Century: Ali v Frazier 50-year anniversary to feature in BBC Sounds series