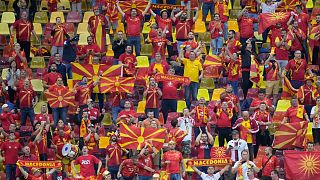 Greece has complained to UEFA over an acronym used by North Macedonia at the European Football Championships.

The logo of the country’s football federation (FFM) appeared on the country’s shirts during their opening group stage match against Austria.

But Greek ministers have stated that North Macedonia cannot play under the acronym “MKD” and must use another term in line with the Prespa agreement, which changed the constitutional name of the former Yugoslav republic.

Foreign minister Nikos Dendias sent a letter on Sunday to his counterpart in North Macedonia, requesting the team comply with the agreement.

Meanwhile, Greek sports minister Lefteris Avgenakis sent another letter to UEFA president Aleksander Ceferin on Saturday asking him to intervene in the matter.

The Prespa agreement, signed in June 2018 after lengthy negotiations, ended years of disputes between Athens and Skopje.

The disagreement between the two neighbouring countries over the name led to a Greek veto on North Macedonia’s accession to NATO and the European Union for almost 30 years.

Nationalists in Greece saw the name change as a usurping of the cultural heritage of the ancient Macedonians.

However, Osmani has said that the MKD initials were not contrary to the Prespa agreement.

“The Football Federation of Macedonia is an independent and non-profit organisation that is registered in the central register as an association, and as such does not receive state money,” he said.

North Macedonia were beaten 3-1 by Austria in their opening UEFA Euro 2020 match.