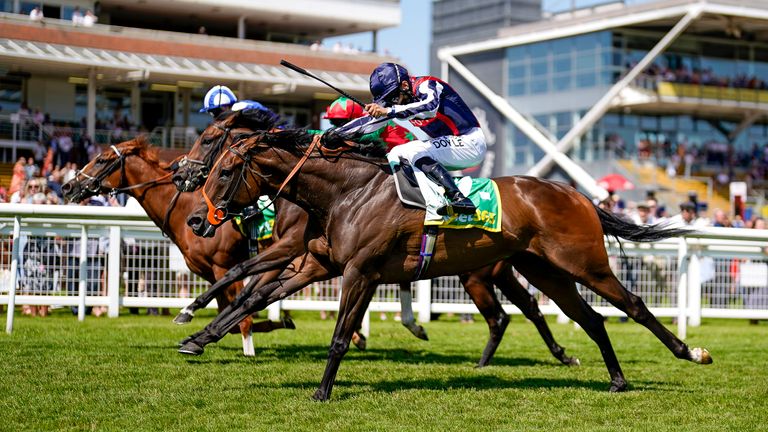 Happy Romance bounced right back to her best in the bet365 Hackwood Stakes at Newbury.

Winner of the Super Sprint on this card 12 months ago, the filly was only narrowly beaten at Sandown last time out but she had generally been running below the form which made her such a favourite of Richard Hannon’s last season.

Along with the Super Sprint she won another sales race at York and a Group Three at Sandown, before finishing a creditable fourth behind Alcohol Free in the Cheveley Park.

Bar a win on the all-weather this season Happy Romance has struggled, but back on a quicker surface she proved she retained all her old ability and perhaps a bit more when seeing off last year’s winner Tabdeed and Diligent Harry.

Diligent Harry tried to make all, but Tabdeed breezed by with a furlong to run, only for Happy Romance to swamp them both. Diligent Harry snatched second back right on the line. As he has been all her career, Sean Levey was on board.

Winning owner Ray McMurray, who received a rapturous reception when picking up the trophy, said: “After Sandown we thought there was something there, but she just hasn’t had her ground all season.

“We thought she had every chance today, we were cautiously optimistic as the last time we had this sort of going was in the Super Sprint last year.

“This is better though, last year there were 10 people here!

“Richard always said she’s trained on, but he actually said the worry might be crowds as none of last year’s two-year-olds had ever seen one.

“She had to prove it today and now we might go to Goodwood and take on Battaash, I think she deserves to.”

Happy Romance was cut to 14-1 from 25s for the King George Stakes at Goodwood by Paddy Power.