Denver Nuggets coach Michael Malone broke down in tears as he paid tribute to the victims of Monday's mass shooting in Boulder, Colorado.

He read out the names of the 10 victims at a news conference before Tuesday's game against the Orlando Magic.

"Our thoughts and prayers are never enough," Malone said.

"Yesterday was another tragedy. Hopefully, it's something we can find a way to prevent from happening in the future."

Malone added: "We get judged on wins and losses, but if you take a step back and put yourself in one of those families, what do you feel?

"I think about Eric Talley [a victim of the shooting] and his seven kids. That's what I think about, and I'm just heartbroken for them and for everybody else.

"Hopefully we as a country, we as a state, can find a way to be better." 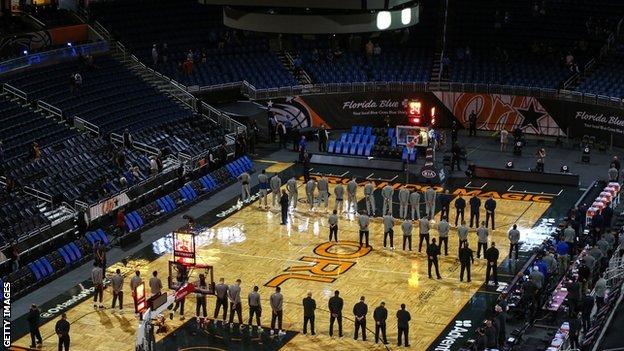 Denver Nuggets player PJ Dozier said the squad had discussed the shooting when they arrived in Orlando for Tuesday's game, which was preceded by a moment of silence in tribute to the victims.

"We just talked about how tragic it is," Dozier said. "It is very unsettling, disturbing and disgusting. We continue to see things like that happen in our country.

"As an NBA player, as a son, as a brother, it hurts my heart to know there are families out there that have to grieve through it and live through it, ultimately."

Golden State Warriors coach Steve Kerr also spoke out about the incident at a news conference before his side's game against the Philadelphia 76ers.

"I think it's, first of all, important to reference their names," Kerr said, sitting in front of a backdrop listing the names of the victims of the Boulder shooting and the eight people who were killed a mass shooting in Atlanta last week.

"These are human beings. These are people who have been lost.

"The thought of the mothers and fathers and sisters, brothers, daughters and sons who are grieving right now with the loss of the people behind me is just devastating."