From 1996 to 2020, we pick out seven of the greatest European finals in Heineken Champions Cup history. From Toulouse in the competition’s very first edition, to title wins by Bath, Leicester Tigers, Wasps, Munster, Leinster and, most recently, the Exeter Chiefs.

In the final week of European rugby’s 2020/21 season, we look back over the greatest Heineken Champions Cup finals in history since the inaugural tournament in 1996… 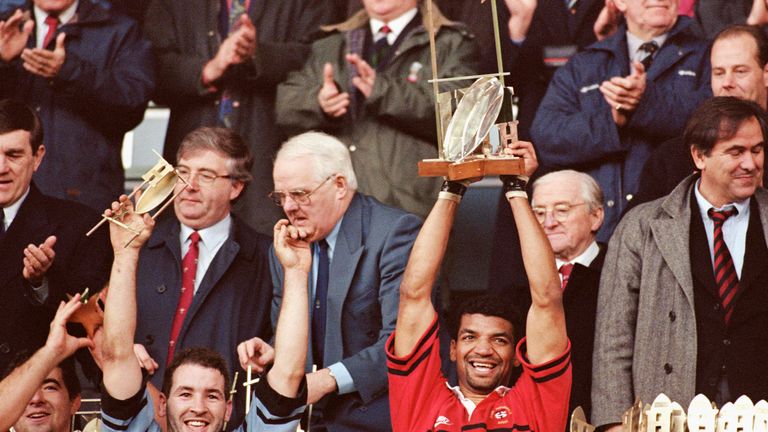 Toulouse’s Emile Ntamack become the first ever captain to lift the European Cup in 1996. His son Romain Ntamack will play for Toulouse in the final this weekend…

The French side scored twice in the first 10 minutes, with tries from Thomas Castaignede and Jerome Cazalbou giving them an early lead, before Adrian Davies kicked Cardiff back into the contest and a last-minute penalty levelled the game at 15-15 to force extra time.

Deylaud made the difference in the extra 30 minutes and his two kicks settled the match in a dramatic conclusion to the first European final.

In the third edition of Heineken Cup finals, Bath broke the French hold in highly dramatic fashion against the reigning champions in Brive. 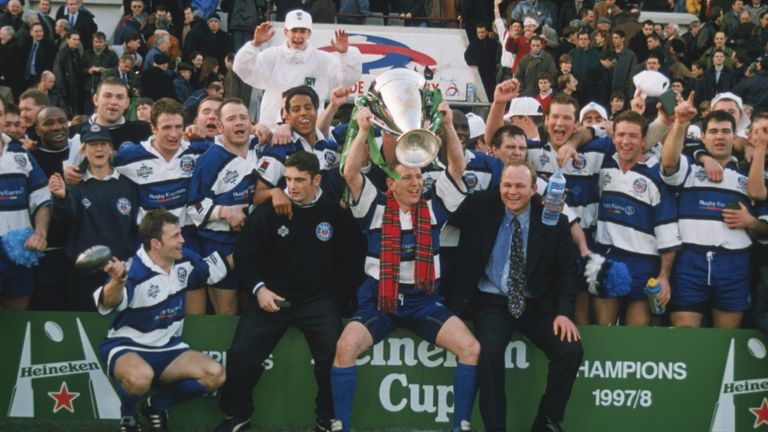 Early into the second half, Bath sat nine points adrift and appeared on the ropes, with Brive poised to provide the killer punch as they camped on the Bath line with a succession of scrums.

An incredible seven times the 1997 cup winners tried to break Bath and seven times Bath refused to buckle. The psychological battle was won and lost in those few power-packed minutes.

Bath slowly edged back into things on the scoreboard before a fourth penalty from full-back Jon Callard two minutes into injury time sealed victory in the one and only occasion Bath took the lead in the final.

Brive centre Christophe Lamaison still had one final penalty chance to keep the cup in France but was wide to the right, before fly-half Lisandro Arbizu then watched in despair as his attempted drop-goal also failed to find the target.

Up there with the most entertaining of European Cup finals in history, Leicester clinched their first triumph in the competition in 2001 after a stirring win over Stade Francais in Paris. 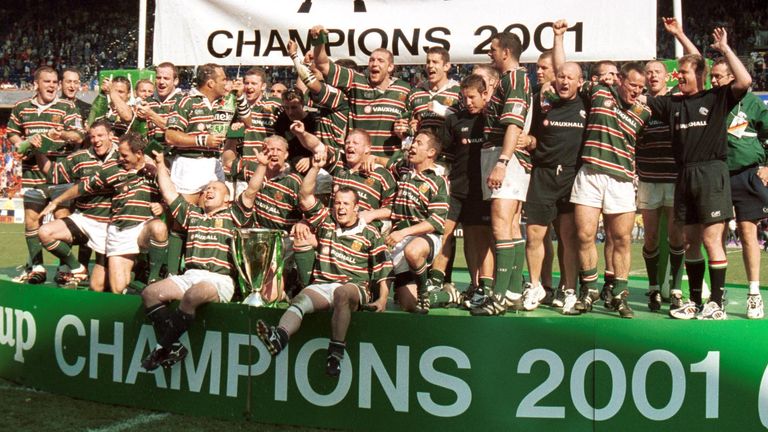 It looked as if the French side would be crowned champions, leading for most of the match, but a try from Leon Lloyd in the last minute snatched the win for the Tigers.

Diego Dominguez scored all of Stade Francais’ points, which included nine penalties, as the side stood on the verge of European glory.

Trailing 15-9 at the break, Lloyd scored at the start of the second half before Neil Back’s converted try made it 21-21.

Dominguez edged Stade Francais back in front, but the contest was decided right at the end when man of the match Austin Healey broke clear down the middle and set up Lloyd for the winning try.

Rob Howley’s late try gave Wasps a sensational victory over Toulouse in 2004 at Twickenham for their first trophy success in the tournament. Wasps had the upper hand in the first half, with Stuart Abbott crossing the line to give them the lead, before Toulouse fly-half Yann Delaigue replied to bring his side back to within two points of their opponents.

Full-back Mark van Gisbergen followed up with Wasps’ second try, but the English club were pegged back by two penalties from Jean-Baptiste Elissalde.

The final then appeared to be heading towards extra-time until Howley raced on to his own grubber kick to score the decisive try in the corner for Wasps, but only after Clement Poitrenaud had made the error of all European Cup final errors, willing and waiting for the bouncing ball to land in-goal but failing to get there ahead of Howley.

After several years of semi-final heartache and two agonising near misses in finals, it was third time lucky for Munster in the Heineken Cup in 2006 after edging past Biarritz in Cardiff. Munster led 17-10 at half-time, but the French side closed to within a point after a couple of penalties from Dmitri Yachvili to set up a tense finale.

However, reliable fly-half Ronan O’Gara fired over his third penalty of the match and Munster held out to seal an emotional first European triumph. In 2011, Leinster clinched their second title after conjuring the largest final comeback in the competition’s history after a gripping 33-22 win over Northampton in Cardiff. Leinster picked up their second European title in 2011, coming from 22-6 behind to beat Northampton

The Saints appeared on course for a second European Cup victory after taking a 22-6 half-time lead. But a stunning fightback from the Irish side, led by Johnny Sexton, enabled them to win the tournament for the second time in three years.

Tries from Phil Dowson, Ben Foden and Dylan Hartley put Northampton on course for victory before Leinster rallied and completely dominated the second half.

Sexton scored after the restart and the Ireland fly-half quickly crossed the line again before a Leinster penalty enabled them to turn their hefty deficit into a one-point lead within the space of 17 second-half minutes.

Just seven months ago, the rescheduled 2020 final ensured a new name would be on the trophy as Exeter and Racing faced off behind closed doors in Bristol due to Covid-19. The competition’s most-recent winners are Exeter Chiefs, after their stunning defeat of Racing 92 last year behind closed doors

Supporters were robbed of one of the most entertaining finals in history, as a ding-dong affair saw Exeter slide into a 14-0 lead inside 20 minutes after tries from Luke Cowan-Dickie and Sam Simmonds.

Racing then hit back with tries from Simon Zebo and Juan Imhoff, but the Chiefs had the final say of the first half as Harry Williams scored in the last play.

Zebo notched his second for Racing soon after the restart, but Henry Slade scored two minutes after that to give Exeter daylight again. Just five minutes later, Camille Chat was over for Racing and with 15 minutes left, Maxime Machenaud kicked a penalty to reduce the Exeter lead to just 28-27.

Desperate try-line defence from the Chiefs kept Racing out further, while a pivotal Sam Hidalgo-Clyne breakdown turnover proved critical. Joe Simmonds then made sure of victory with the final kick from a penalty, and despite referee Nigel Owens’ confusion over the match clock, there would be no Racing restart.