From dominating the amateur game to celebrating success at The Masters, we look at Hideki Matsuyama’s journey to winning the Green Jacket at Augusta National and becoming Japan’s first male major champion. Nick Dougherty, Paul McGinley and Andrew Coltart look back at the best of the action from the final round of the 85th Masters at Augusta National.

Hideki Matsuyama ended Japan’s long wait for a male major champion at The Masters, a decade on from kickstarting his career with another piece of Augusta success.

The 29-year-old pulled clear of the field after following a superb third-round 65 with a one-over 73 on the final day, seeing him hold on for a one-shot victory and making him the first Asian recipient of the Green Jacket.

Matsuyama was already a star name in his home country long before his major breakthrough, with the five-time PGA Tour winner first announcing himself on the world stage as a teenage amateur at The Masters back in 2011. 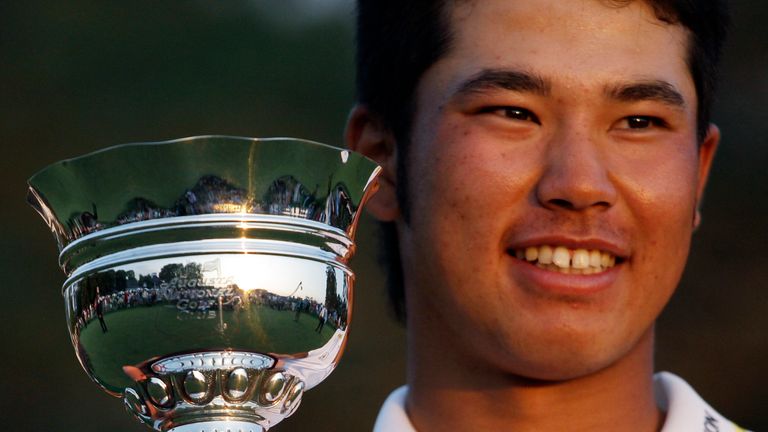 The-then 19-year-old took full advantage of the invite to Augusta he was awarded for winning the Asia-Pacific Amateur Championship the previous year, winning the Silver Cup – awarded to the leading amateur – after a tied-27th finish.

Matsuyama delayed turning professional after his experience in the Butler Cabin and witnessing Charl Schwartzel earning the Green Jacket, as he claimed gold for Japan at the World University Games and registered a maiden win on the Japan Golf Tour on his way to becoming world amateur No 1.

He broke inside the world’s top 50 just months after turning pro in April 2013, posting top-20 finishes in three majors that year and winning four times on the Japan Golf Tour, before celebrating a maiden PGA Tour title the following year after being Kevin Na in a play-off at The Memorial.

Matsuyama’s career moved up a level in 2016 as he celebrated five worldwide vic tories, including the Waste Management Phoenix Open and a maiden World Golf Championship title in Shanghai, with a win at the Tiger Woods-hosted Hero World Challenge lifting him to sixth in the world rankings. Matsuyama claimed a seven-shot victory at the WGC-HSBC Champions

A successful title defence in Phoenix the following year and a five-shot win at the WGC-Bridgestone Invitational – where he carded a final-round 61 – took him to world No 2 and cemented his status as one of the world’s best, but things quickly changed with an unexpected title drought.

Matsuyama failed to make a major breakthrough at the PGA Championship the following week, bogeying two of his last three holes to finish tied-fifth three behind champion Justin Thomas, with the Japanese player then sliding down the world rankings as he battled to reclaim his best game.

A disappointing 2018 saw Matsuyama register just three worldwide top-10s in 25 starts and was followed by further winless campaigns over the next two years, with a runner-up finish at November’s Vivint Houston Open his most recent top-10 prior to his unexpected Masters success.

Matsuyama’s work with Hidenori Mezawa failed to make a noticeable impact ahead of his arrival at Augusta National, having finished no higher than tied-15th in his first 10 PGA Tour starts of the year, only for his fortunes to change in dramatic fashion and at one of golf’s biggest events.

Matsuyama claimed a seven-shot victory at the WGC-HSBC Champions

Eight days after Tsubasa Kajitani won the Augusta National Women’s Amateur in a play-off at the same venue, Matsuyama celebrated more Japanese glory at Augusta and achieved a feat that none of his male compatriots – including World Golf Hall of Fame’s Isao Aoki – had previously managed.

Japanese women have won professional majors through Hisako Higuchi and Hinako Shibuno, while Matsuyama is now the first male player from the country to win a major and makes him an even bigger golfing superstar in his home nation.