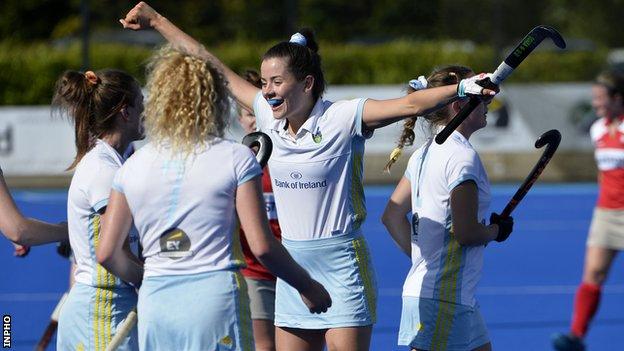 The women's and men's Senior Cup finals were held in September

Hockey on the island of Ireland has been suspended until further notice following changes to Covid-19 restrictions on both sides of the border.

On Wednesday the Irish government announced the removal of the exemption for senior club championships to be played in Level Three of the country's 'Living with Covid' plan.

This followed the Northern Ireland Executive's move to cancelling all but elite sport.

Following these changes, the board of Hockey Ireland has taken the decision to postpone all hockey competition on an all-Ireland basis until further notice, although training can proceed subject to protocols and restrictions, alongside any local guidelines.

As well as the Irish Hockey League and provincial leagues being put on hold it also means the postponement of the interprovincial competitions scheduled for the end of October.

Elite hockey activity can proceed but this applies to the Irish Senior Men and Irish Senior Women's teams only.

In a statement Hockey Ireland said it wished to "acknowledge the work of the clubs that has gone into hosting games over the last few weeks."

"The support of volunteers to follow the protocols and keep our players safe has been phenomenal. We must endeavour to keep club hockey activity going whilst we continue to observe Covid-19 guidelines and hopefully, we can resume competition soon," said the governing body.

Three rounds of matches in the Irish Hockey League had been completed although teams in Cork had refused to travel to both Dublin and Belfast to fulfil fixtures because of health and safety concerns and were subject to forfeiting those games, although that penalty had been suspended and would only be applied if they repeated the offence.

Ulster Hockey had already taken the decision to suspend all matches at all levels until 14 November and will now follow the guidance from Hockey Ireland as the sports governing body.