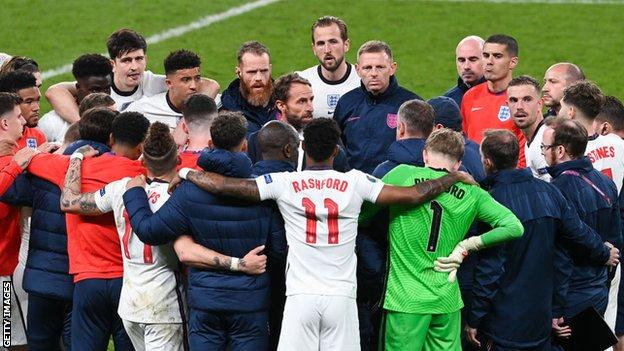 Euro 2020 ended in disappointment for England, but another shot at major tournament success is just 16 months away.

Provided the Three Lions qualify – and they will continue that process in September – they will be in Qatar in the winter of 2022, aiming to go one stage further than they managed this summer.

What shape will they be in and how much expectation should fans have?

England have caught up with rivals – Steve McClaren'England have given this country a pride way above football'How does England get over more penalty disappointment? 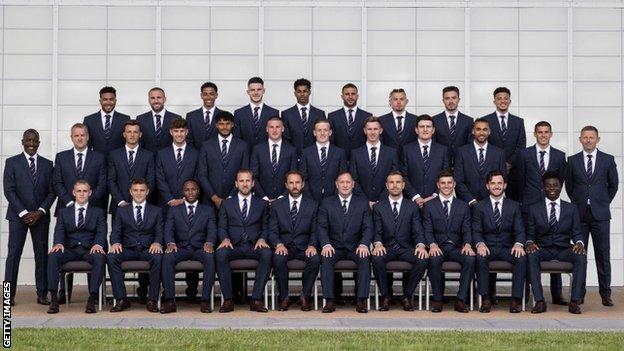 At 25 years and three months, England's squad at the start of Euro 2020 was the second youngest in the competition behind Turkey

Euro 2020 showcased England's youngest squad at a major tournament since 1958 and included the naming of their youngest ever starting XI at such an event, against Scotland in the group stage (25 years and 31 days).

It is feasible that England could name the same squad again for Qatar, with only three of the current squad over 30 – defenders Kieran Trippier and Kyle Walker and midfielder Jordan Henderson.

Harry Kane, Harry Maguire, Luke Shaw, Raheem Sterling, John Stones and others will, in theory, be in their prime. The relatively new central midfield pairing of Declan Rice and Kalvin Phillips has more time to develop and Bukayo Saka may have grown further still in importance.

Some of the players that could rise to international prominence include those we only saw flashes of at Euro 2020. Borussia Dortmund's Jude Bellingham, Manchester City's Phil Foden and Manchester United-bound Jadon Sancho excelled on the biggest stage for their clubs last season and will go into Qatar 2022 with another Champions League campaign under their belt.

Competition will also come from other young players who were not involved in the Euro 2020 finals, these including Trent Alexander-Arnold, Mason Greenwood, Callum Hudson-Odoi, Emile Smith-Rowe and many more besides.

England's progress under Gareth Southgate is clear – a semi-final spot at the 2018 World Cup and last-four showing in the Nations League a year later have now been followed up by a final appearance at Euro 2020. There is only one place left to go.

England were beaten on penalties by Italy, but did not lose any of their six Euro 2020 games this summer, extending their unbeaten run in all competitions to 13 matches.

Southgate's patient, pragmatic tactical approach is not to everyone's taste, but the results are clear to see, not least in defence, with England's two goals conceded and five clean sheets across Euro 2020 the best in the tournament.

Had a couple of kicks gone a different way, Southgate's side would be travelling to Qatar as European champions.

If the Three Lions need a precedent for how to effectively channel their heartbreak, they need only look at France earlier this decade.

At Euro 2016, Didier Deschamps' side were beaten in the final by Portugal on home soil. Two years later, under the same manager, with many of the same players and employing an efficient, pragmatic style, they made amends, beating Croatia 4-2 in the final in Russia to lift the World Cup.

'England must be let off the leash to end glorious failures'

Southgate you're the one?

In the aftermath of Sunday's final defeat, Southgate voiced his desire to continue in the job through to the World Cup, albeit with a note of caution about the "toll" the job takes.

Southgate's record as England manager is second only to Sir Alf Ramsey, who led his team to World Cup success in 1966 and followed it up with a semi-final spot at Euro 1968 (although there were only four teams in the finals back then).

If Southgate does carry on and take England to Qatar, he will join Ramsey, Ron Greenwood, Sir Bobby Robson, Sven-Goran Eriksson and Roy Hodgson as national team bosses to take the team to three major tournament finals. Only Walter Winterbottom, with four, has managed more.

If there is a natural shelf-life for an England boss, Southgate's could well expire after Qatar. It is worth noting that few have gone out on a high, with Robson and Terry Venables perhaps the arguable exceptions. Ramsey's reign ended with failure to qualify for two major finals in succession.

If Southgate needs a warning of the dangers of staying on too long, he need only look at Joachim Low, who led Germany to four semi-finals and World Cup victory in his first five major tournaments before bowing out off the back of a group stage exit in 2018 and last-16 defeat this summer.

With qualifiers in September, the finals 16 months away and a young squad still developing under him and the Football Association firmly behind him, Southgate clearly remains the one.

Next year's World Cup in Qatar will be the first one to be staged in winter and the tournament has been beset by controversy ever since it was awarded to the Gulf state in 2010, with construction-related deaths, concern for workers' rights and Amnesty International saying some practices had "ruined lives".

It will start on 21 November, with the final on 18 December.

Temperatures at that time of year average between 18-24C and will be much cooler than if the World Cup had been held in the months of June and July, when temperatures can reach 40C.

The timing of the tournament means it will come in the middle of the Premier League season as opposed to between two campaigns. All players playing in the major European leagues will be in the same boat.

The leagues of the main South American countries usually end in December, meaning they will come into Qatar off the back of a complete season.

BBC Sport understands Premier League chiefs are planning to start the 2022-23 season a week earlier than normal and finish a week later in order to create space for the World Cup. 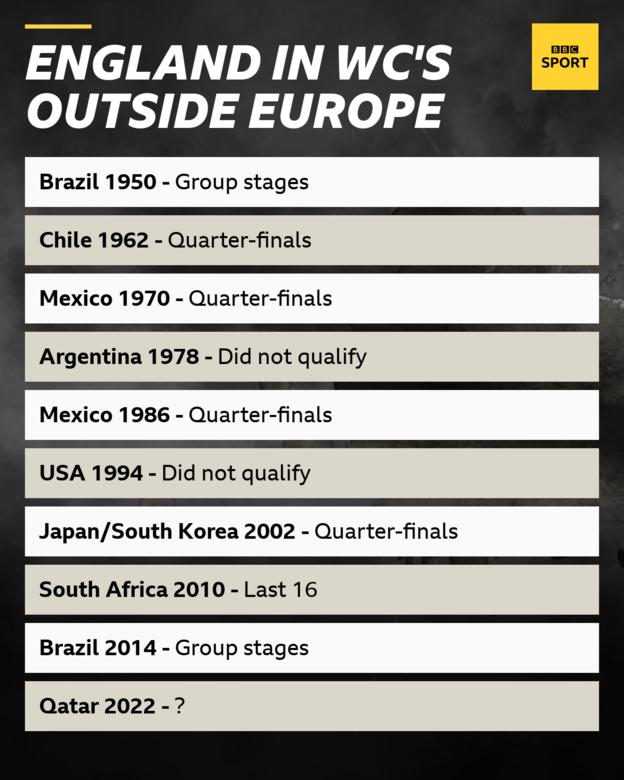 A time of transition elsewhere?

England's squad is more settled than most with 16 months to go until Qatar.

Of the historically prominent teams at Euro 2020, Germany and the Netherlands will be starting again under new a new manager, while Belgium and Portugal have key players who may be at an age where they decide to call it a day.

France and Spain will again be strong, but also have issues to solve judging by this summer. Italy have proved their power, but at 36 and 34 years-old respectively, how much longer can key defensive duo Giorgio Chiellini and Leonardo Bonucci continue?

Outside of Europe, Argentina and Brazil were the best two sides at the recent Copa America, but neither are the powerhouses they have been in the past, with Lionel Messi now 34 and Neymar lacking back up to maximise his undoubted talent.

England have ended Euro 2020 ranked sixth in the world on our world ranking. Belgium, Brazil, Argentina, Italy and France are all ranked above England with the English team being the "best of the rest" above Spain, Portugal, Colombia and Denmark.

There are so many uncertainties at present but England will again be in their customary position of an expected quarter-final in Qatar if they cannot improve to be one of the top four teams in the world between now and the start of the World Cup. After that, it is a case of needing a bit of luck in the draw as happened in Russia in 2018.

The key to success for most teams is to minimise the number of matches played against better opposition. England came unstuck against the higher ranked Italy in the Euro 2020 final, the eighth competitive match under Southgate against opponents ranked higher on our world ranking than themselves.

England have won just two of those eight games under Southgate, against Spain and Belgium in the Uefa Nations League. They have drawn two and lost four.

For England to have a chance at World Cup 2022, they need to become one of the best four teams in the world and even then, they would still need some luck on their side.