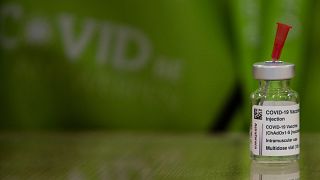 More than 85 million coronavirus vaccine doses have been distributed by vaccine manufacturers to EU and EEA countries and millions more are expected to arrive before the summer months.

Four vaccines are approved for use in the bloc – the Pfizer/BioNTech and Moderna mRNA vaccines, as well as the AstraZeneca/Oxford vaccine and the single dose jab from Johnson & Johnson.

But the EU has been heavily criticised for its slow vaccine rollout, with critics emphasising that they needed to incentivise companies better to scale up vaccine production before the vaccines were authorised.

Here’s a look at how vaccine procurement has worked in the EU.

How did vaccine procurement work?

The European Commission agreed to enter advance purchase agreements with vaccine developers as part of a vaccine strategy issued in June 2020.

The idea behind the agreements was to finance the upfront costs for vaccine manufacturers in exchange for a specified number of vaccine doses.

The agreements were signed following negotiations with vaccine suppliers and input from all member states in a Steering Committee.

The EU invested €2.7 billion through their emergency support instrument in order to finance the vaccine contracts and focussed on building a diverse portfolio of vaccines.

Critics say the ensuing production and delivery delays stemmed in part from these contracts, saying they should have included penalties if companies did not produce the agreed-upon doses prior to their authorisation.

“If you are a professionally run company and you make a contract for some hundred million doses, and the other side that orders the contract can cancel the contract until the very last second and the very last second means the approval from the EMA, then you will not do everything to start production right away in order to fulfil your commitment. But what you will do is you would wait until the last second as well and then start seriously with the production once the EMA has approved this,” says Gustav Oertzen, a lecturer at Leuphana University in Germany.

What is the allocation based on?

The Commission has said that the vaccine dose allocations were based on population data per member state.

Once a contract was determined with the company, member states had to opt-in to decide whether to buy the full amount of allocated doses for each vaccine. If they didn’t, the doses are redistributed among the member states.

Officials say some member states had decided not to fully opt-in for some of the more difficult to handle vaccines, such as the mRNA vaccines that have to be stored in colder temperatures.

Austria’s chancellor has claimed the population key is not fair, but according to European Centre for Disease Prevention and Control data, most European countries have received enough doses to fully vaccinate nearly 10% of their populations.

The vaccine delivery schedules are determined between each member state and the vaccine companies. A spokesperson for the EU said that the Commission has been “kept aware of schedules”.

In some countries, the vaccine doses are delivered to a local site for the country to then organise distribution.

Other countries prefer that the vaccines be shipped to directly sites that are vaccinating people.

COVID-19 vaccine: What are the real reasons behind the EU’s slow rollout?COVID vaccine rollout ‘unacceptably slow’ in Europe as cases rise, warns WHO

The supply chains for these vaccines are complex and span multiple countries. 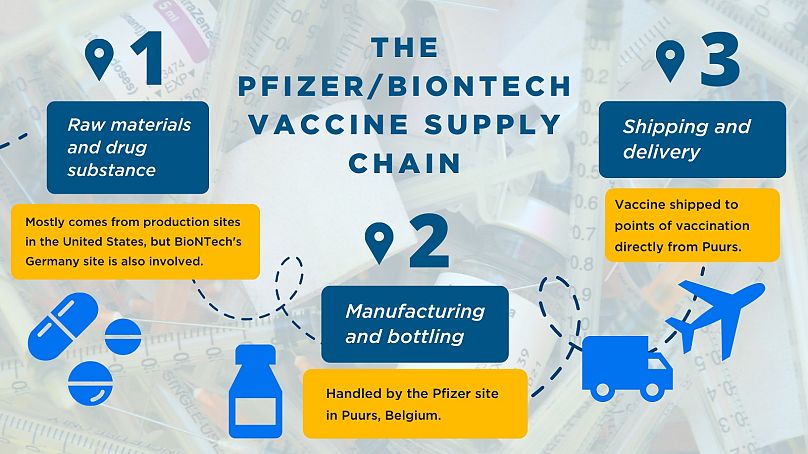 How the supply chain worksEuronews

For instance, the raw materials and drug substance from Pfizer and BioNTech’s vaccine mostly comes from production sites in the United States although BioNTech’s Germany site is also involved.

Currently, the manufacturing and bottling of the vaccine in Europe is handled by the Pfizer site in Puurs, Belgium. It is shipped to points of vaccination directly from that site.

Puurs is also “Pfizer’s primary manufacturing supply for vaccine deliveries outside the US,” a spokesperson told Euronews.

This means that in line with newly introduced Commission export regulations, put in place so the EU must sign off on vaccine exports, the company has had to submit extra paperwork.

This “has caused a significant administrative burden on our tightly calibrated supply chains,” a Pfizer spokesperson said.

Overall the Pfizer/BioNTech vaccine has about 280 materials, coming from 86 suppliers and 19 different countries yet the company has gotten the manufacturing process down to 60 days from start to finish. 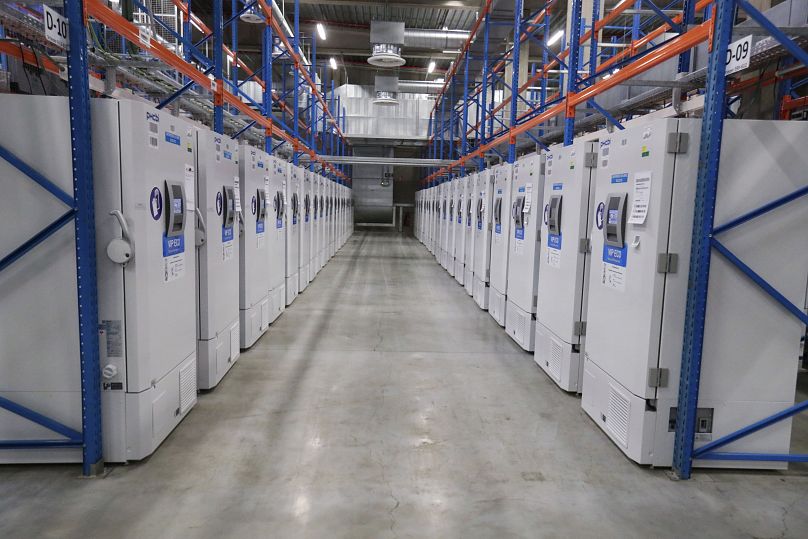 Lines of refrigerators containing COVID-19 vaccines in a warehouse at the Pfizer vaccine production site in Puurs, Belgium.Stephanie Lecocq, Pool via AP

Johnson & Johnson also said their vaccine will travel to multiple countries and sites during the manufacturing process.

In Europe, the drug substance or active ingredient is produced in Leiden, Netherlands but is then shipped at -70 degrees Celsius to production and bottling sites. In the EU, there are manufacturing sites where the vaccine will be made in France, Spain, Germany and Italy with other companies.

The company says making a batch of vaccines takes between 60-70 days from start to finish. Despite the vaccine being authorised in early March, the first vaccines will arrive in EU countries by April 19.