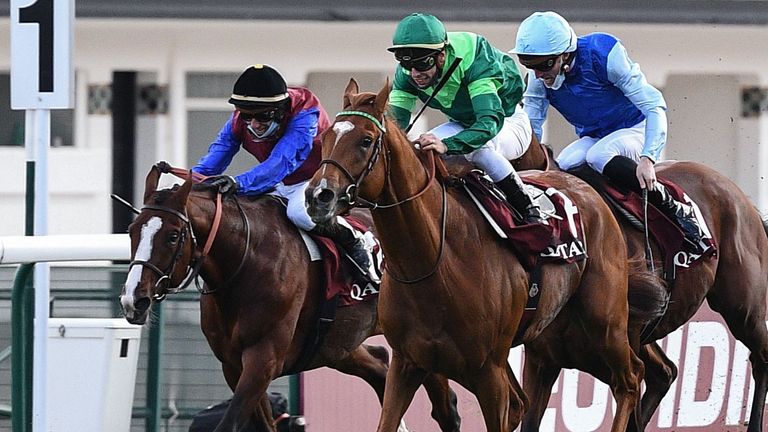 Olivier Peslier’s mount quickened off a pace that was little more than a crawl to master Vaucelles and then comfortably hold old rival Sublimis and pass another test en route to a return to Longchamp in October.

The four-year-old’s trainer Francis-Henri Graffard was not surprised when informed that his charge had clocked a time 20 seconds slower than the record for the distance, and expressed a view that his odds-on winner would not be allowed to rest on his laurels before the first Sunday in October.

Next up for In Swoop will be either the Grand Prix de Saint-Cloud or the King George VI And Queen Elizabeth Stakes at Ascot at the end of July.

Graffard – who had considered a crack at the Coronation Cup – said: “I’m glad we stuck to our original plan to bring him here. It (Epsom) was an option, but we wanted to stick to the programme. I was very upset when I saw all the rain at Epsom, but he’s kept going today off that very slow pace and will be 100 per cent next time.

“Once he quickened with that kick from Olivier at just the right time they were never going to get to him, and he’s improving with every run. He will handle soft, good to soft and good ground, but on good ground he would need a fast pace which we might get in the King George. He’s entered for the Grand Prix de Saint-Cloud and we need to look at that first.”

Graffard sited the importance of his colt having a run in the summer and concluded: “He’s not the sort of horse you can afford to stop with for too long, which is why he will go to Saint-Cloud, or Ascot, or both.”

Tahlie continued her rise up the ranks when taking her winning run to four in the Group Two Prix de Sandringham.

The Pascal Bary-trained filly led inside the final furlong in the hands of Christophe Soumillon, to register a third course success that included a Listed contest last month.

However, the 11-8 favourite was all-out to hold the late challenge of Kennella, who had finished third in the French 1000 Guineas.

Kevin Ryan’s British raider Bellisime was last of the five runners after making most of the running.

“I think she has earned a crack at a Group One – she will be entered in more than one of those, but the obvious race for her is the Prix Rothschild at Deauville.”