Ahmedabad pitch on which India beat England inside two days avoids ICC punishment with surface rated ‘average’ by match referee Javagal Srinath; venues can be suspended if they pick up enough demerit points; India fined 20 per cent of match fees for slow over-rate in second T20I vs England 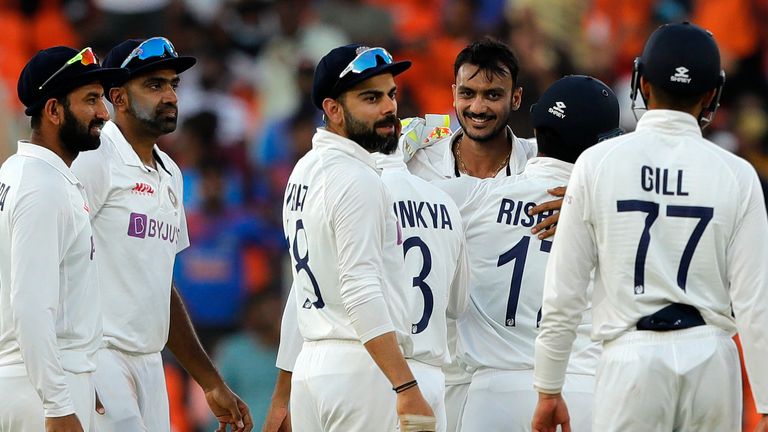 The Ahmedabad pitch on which India beat England inside two days in February’s third Test has avoided punishment by the International Cricket Council.

Thirty wickets fell inside two days of the pink-ball game as India beat England by 10 wickets to take a 2-1 lead in a series they would go on to win 3-1 to extend their winning run in home Test series to 13.

Match referee Javagal Srinath has given the surface an ‘average’ rating, which means it will not accrue any demerit points.

Sky Sports’ Rob Key was one of a number of pundits to criticise the surface, on which both sides failed to reach 150, with England skittled for 112 and 81 and India making 145 in their first innings. The ICC gives pitches and outfields one of six ratings – very good, good, average, below average, poor and unfit.

A ‘below average’ rating by the ICC match referee brings one demerit point, a ‘poor’ rating brings three while the lowest rating of ‘unfit’ comes with five.

The pitch for the second Test at Chennai’s MA Chidambaram Stadium has also been graded ‘average’ – India won that game by 317 runs on a spin-friendly surface.

The Chennai pitch for the first Test – which England won by 227 runs – has been graded ‘very good’, while the surface for the fourth Test in Ahmedabad – which India won by an innings and 25 runs – has been rated ‘good’.

Meanwhile, India have been fined 20 per cent of their match fees for maintaining a slow over-rate during the seven-wicket, series-levelling win over England in Sunday’s second T20 international in Ahmedabad.

Srinath imposed the sanction after Virat Kohli’s men were ruled to be one over short of their target after time allowances were taken into consideration. In accordance with Article 2.2 of the ICC Code of Conduct for Players and Player Support Personnel, players are fined 20 per cent of their match fees for every over their side fails to bowl in the allotted time.

Kohli pleaded guilty to the offence – which was levelled by the umpires for Sunday’s match – and accepted the proposed sanction, removing the need for a formal hearing.

Watch the third T20I between India and England from 1pm on Tuesday on Sky Sports Cricket and Sky Sports Main Event.