England’s three remaining T20 internationals against India in Ahmedabad to be played without fans in attendance due to rise in the number of coronavirus cases; supporters were permitted to attend first two games of five-match series on Friday and Sunday England’s three remaining T20 internationals against India in Ahmedabad will be played behind closed doors due to a rise in the number of coronavirus cases in the state of Gujarat.

Fans were permitted to attend the first two games at the Narendra Modi Stadium with crowds in excess of 60,000 but supporters will now be absent for the matches on Tuesday, Thursday and Saturday.

BCCI honorary secretary Jay Shah said in a statement: “The Board of Control for Cricket in India (BCCI) in consultation with the Gujarat Cricket Association (GCA) has decided to conduct the final three T20Is against England at the Narendra Modi Stadium behind closed doors.

“The decision was arrived at following detailed discussions with the state and local health authorities.

“The BCCI will continue to comply with all the regulations put in place to curb the spread of the Covid-19 virus and will always put the health and safety of its fans and stakeholders at the top.

“Those who have purchased tickets for any or all three T20Is will be refunded.” 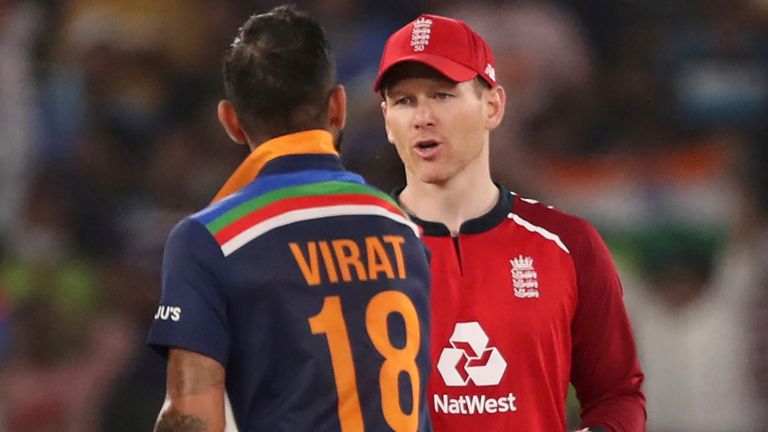 An ECB spokesman said: “Aside from meaning there will be considerably less noise in the stadium it doesn’t materially affect us.

“We remain in our bubble and even when crowds were in attendance we never came into contact with any of them, and the ball was sanitised whenever it was hit into the stands.”

England beat India by eight wickets in the first T20 international on Friday before the hosts bounced back to level up the five-match series at 1-1 with a seven-wicket win in the second game.

After the conclusion of the T20I series, England will play India in three one-day internationals in Pune, on Tuesday, March 23, Friday, March 26 and Sunday, March 28.

Watch England’s third T20 against India, in Ahmedabad, live from 1pm on Tuesday on Sky Sports Cricket and Sky Sports Main Event. You will also be able to follow text commentary and in-play clips through our live blog on skysports.com and the Sky Sports app.