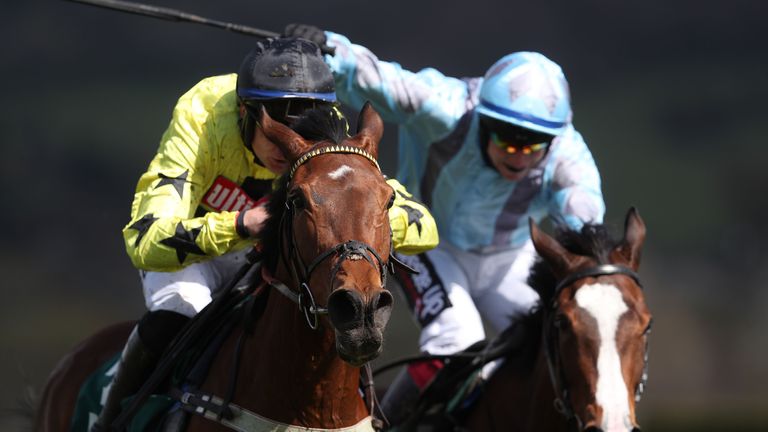 Form from the Festival played its part as Her Indoors came out on top in the NAF Fillies’ Juvenile Handicap Hurdle at Cheltenham.

According to trainer Alan King, the 6-1 shot found the hustle and bustle of the Fred Winter (Boodles Juvenile Handicap Hurdle) a shade intimidating, and was happier in this smaller field.

Under Adrian Heskin she seized command from Scholastic on the approach to the final flight, staying on the better to score by three and a half lengths.

“It was a good race to target,” said King of the Grade Three contest.

“I thought the smaller field would certainly help her, and with her stamina she would power up the hill.

“It might be a while before she runs back over hurdles as I plan to give her a few runs on the Flat.”

Heskin said: “She was a bit star-struck in the Fred Winter, but is a good tough filly who has the scope to jump a fence one day.

“She wants a stiff two miles and will stay two and a half. She has a good heart and a lovely attitude, and I knew half a furlong before the last she was going to win.”

Martello Sky also took part at the Festival and she readily outclassed her foes under a confident Aidan Coleman in the Irish Thoroughbred Marketing Mares’ Novices’ Hurdle.

In spite of three withdrawals on account of the changing ground, the Lucy Wadham-trained grey went off at 10-11 before pulling two and three-quarter lengths clear of market rival Sandymount Rose up the final hill.

Eight in the mares’ novices’ hurdle at the Festival, Coleman confessed his mount was confidently expected to prevail, saying: “She’s a very very nice mare, and I fancied her before the non-runners were announced.

“She now has black type with loads of options in the new mares’ programme for next season. She flicked he ears turning for home, but jumped super, and I was delighted with her.

“She stayed the trip well, and while they went slow early on I’m sure she will have no problem with the distance in a more strongly-run race.