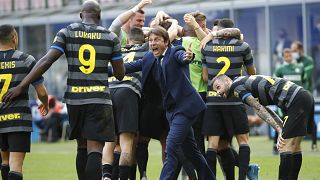 Ecstatic Inter Milan fans gathered in the city’s iconic Piazza del Duomo on Sunday to celebrate their club clinching the Serie A title.

Antonio Conte’s side nudged closer to the trophy with a 2-0 win against Crotone on Saturday.

But Inter were guaranteed the title after Atalanta could only manage a draw at Sassuolo. And their supporters were quick to start the celebrations.

It was Inter’s first Scudetto since Jose Mourinho won the Serie A and Champions League 11 years ago.

It’s Conte’s second season in charge and this win by ‘The Nerazzurri’ ends a nine-run of titles for Juventus.

Last season Inter finished second to Conte’s old side by just one point.

They now have four matches to spare and have a 13 point cushion.