Du Plessis and Ruturaj Gaikwad lay platform for imposing Chennai total and Kolkata slump to 31-5 in reply against Deepak Chahar only for Andre Russell’s powerful fifty to spark a fightback, with Dinesh Karthik and Pat Cummins weighing in with high-octane knocks to set up tense finish 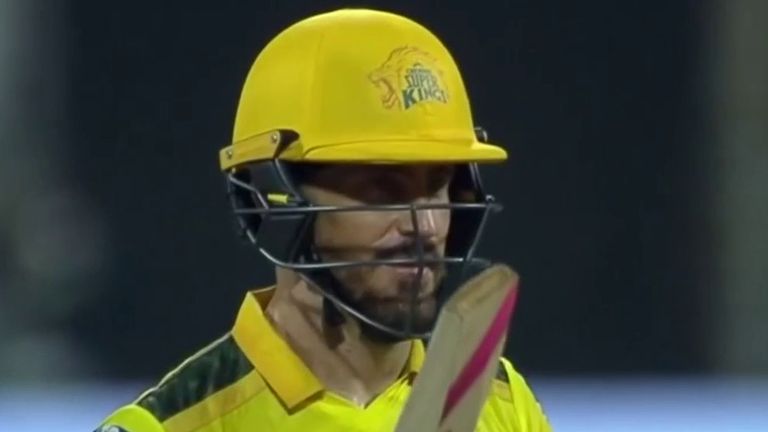 Du Plessis and fellow opener Ruturaj Gaikwad (64 off 42) paved the way for Chennai’s imposing total of 220-3 by putting on 115 for the first wicket.

Kolkata appeared down and out at 31-5 in reply after a devastating opening spell of 4-16 from Chahar only for Andre Russell’s brutal 55 off 22 deliveries and Dinesh Karthik’s 24-ball 40 to reignite the match.

The pair put on 81-run stand for the sixth wicket in six overs and the onslaught was maintained by Pat Cummins, who smote 30 – including four sixes – off one Sam Curran over that included four sixes.

Cummins completed his second IPL fifty off 23 balls and attempted to farm the strike as wickets ebbed away only to be stranded on 66no from 34 balls as Kolkata were dismissed for 202 off 19.1 overs.

Kolkata skipper Eoin Morgan won the toss and elected to field only to find his side quickly under pressure.

Gaikwad had scored just 20 runs in his previous three IPL innings but repaid the faith shown in him by reaching his fourth IPL fifty off just 33 balls.

Together with Du Plessis, he added 54-0 in the six overs, the pair improving the stand to 115 be fore Gaikwad slog-swept Varun Chakravarthy (1-27) to Cummins in the deep. 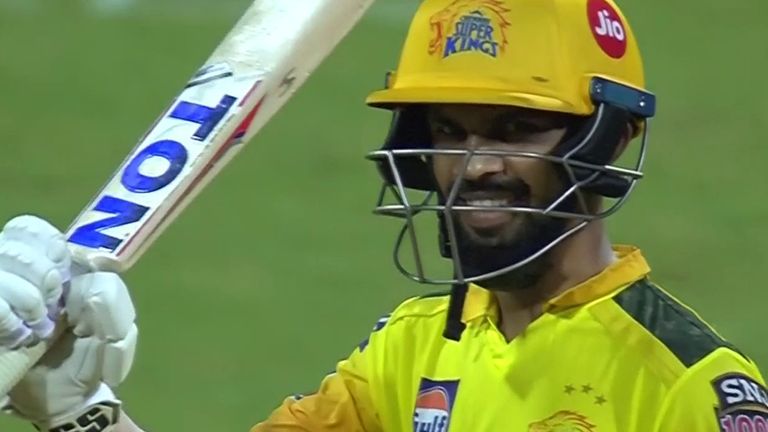 Du Plessis maintained the momentum, bringing up his first half-century of the tournament and 17th in IPL overall off 35 balls, and Moeen Ali (25 off 12) launched Prasidh Krishna down the park for a 79-metre six.

The all-rounder brought up his fifty-run stand with Du Plessis off 26 balls with a six off Sunil Narine only to walk past the spinner’s next ball and be stumped by a distance.

Kolkata conceded 76 runs off the final five overs of the innings for the loss of two wickets, one of them being that of MS Dhoni, who was well caught by a diving Morgan at wide mid-off.

Du Plessis blasted Russell for three fours in a row but could not quite eclipse his highest IPL score of 96, while Ravindra Jadeja ended the innings with a six as Nitish Rana fumbled the ball over the rope.

Kolkata lost Shubman Gill for a first-ball duck at the start of their reply as the opener slashed Chahar to Lungi Ngidi at third man. 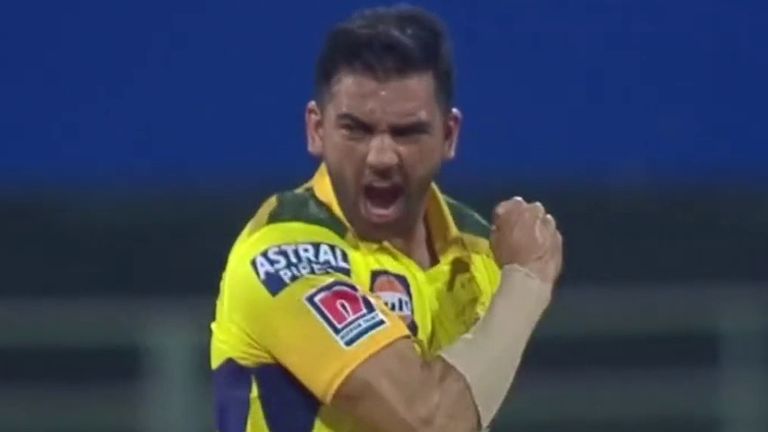 Chennai’s Deepak Chahar, who took 4-13 against Punjab Kings earlier in the tournament, bagged 4-29 against Kolkata

The seamer – who took 4-13 against Punjab Kings earlier in the tournament – struck again with the score on 17 as Dhoni sprinted to square leg to catch a Nitish Rana skier, before Morgan snicked behind for just seven.

Narine mustered one boundary before he was caught by a diving Jadeja in the covers and 31-4 became 31-5 as Rahul Tripathi snicked a rising, straight Ngidi delivery through as he looked to run the ball to third man.

Russell refused to go down quietly, though, flaying 14 off Ngidi in the final over of the powerplay to pave the way for a 50-run stand with Karthik off 25 balls.

The West Indian brought up his own half-century by launching Jadeja over long-off for his sixth maximum only to fall for no further addition.

Curran achieved the crucial breakthrough, bowling Russell behind his legs as he offered no shot to a ball he thought would be a wide, before Karthik was trapped lbw by a well-disguised Ngidi slower delivery.

Cummins refused to throw in the towel, blasting six sixes and four fours in a belligerent, high-octane knock but was not able to drag his team across the line.