KL Rahul (60no off 52) hit his slowest ever fifty for Punjab, while Chris Gayle (43no off 35) scored just three runs off his opening 12 deliveries but the pair’s unbroken 79-run stand saw Kings chase down 132 for a nine-wicket win 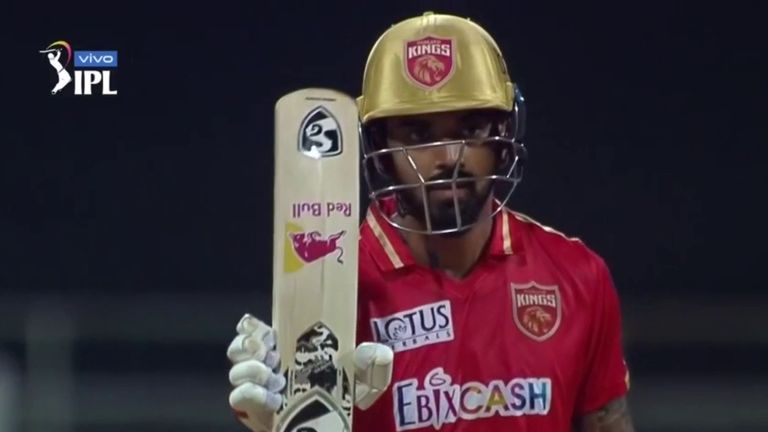 Highlights as Punjab Kings returned to winning ways in the IPL, with a KL Rahul half century and some Chris Gayle fireworks seeing them chase 132 to beat Mumbai Indians.

Punjab did well to restrict Mumbai to 131-6 batting first, despite the best efforts of their captain Rohit Sharma (63 off 52 balls), but the run chase still proved testing on a challenging surface.

With the required rate rapidly climbing as Kings inched their way to 63-1 at the 11-over mark, Rahul (60no off 52) and Gayle (43no off 35) then found the boundary and cleared the rope with regularity in the final few overs to clinch victory with 14 balls to spare.

Rahul’s run-a-ball half-century was his slowest ever for Punjab, but he finished things off in Trent Boult’s 18th over by taking 10 off his next two balls, first smashing a six straight down the ground and then steering four down to third man.

Earlier, having inserted the Indians after winning the toss, Kings managed to restrict them to just 21 runs in the opening six-over powerplay – with the added loss of Quinton de Kock for three.

Ishan Kishan (6) followed in the seventh, ending his painstaking 17-ball stay at the crease as he nicked off to 20-year-old leg-spin talent Ravi Bishnoi (2-21).

It prompted Rohit to finally release the handbrake, and he opened Fabian Allen’s eighth over with back-to-back boundaries, before then launching the West Indian left-arm spinner into the stands in his next over for the first maximum of the innings.

Rohit pulled Deepak Hooda away for six more in the 12th over, while Suryakumar Yadav (33 off 27) got in on the act by lofting Arshdeep Singh over the deep extra cover fence in the 13th as suddenly the boundaries began to flow – the pair putting on 79 for the third wicket.

Suryakumar’s fun was ended by Bishnoi to open the 17th over, seeing the momentum swing back in Punjab’s direction, with Mohammed Shami (2-21) then picking up Rohit as part of two late strikes for the seamer at the death. Mumbai added just 26 runs for the loss of four wickets in the final four overs.

In stark contrast to the Indians’ sluggish start to their innings, Punjab got off to a flier and were seemingly coasting to a convincing victory as Rahul and Mayank Agarwal (25 off 20) raced to a fifty partnership inside seven overs.

Argawal’s wicket in the eighth, though – holing out at long-on off Rahul Chahar (1-19) – prompted a boundary-less four-over period, in which just 11 runs were added to the score.

Gayle had just three runs to his name from his opening 12 deliveries before striking his first four, while Rahul’s earlier fluency deserted him too – that is, until he cracked the second of three sixes for his innings in the 14th over to move to within two of his half-century.

Gayle’s first maximum, a monstrous hit over long-on, duly arrived in the next over and, with the required rate suddenly back below a run-a-ball, he and Rahul steered Kings to what ultimately proved to be a comfortable victory.