South African opener inspires defending champions to their third victory of the tournament after six games, while Krunal Pandya weighs in with quickfire 39; Jos Buttler strikes 41 off 32 balls but Royals can’t cut loose as Jasprit Bumrah returns an economical 1-15 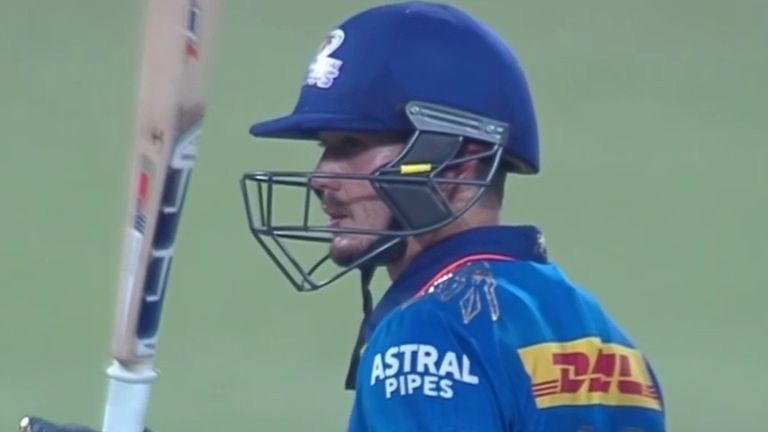 ​​​​​​The defending champions had won just two of their five games in the tournament but cruised to their victory target of 172 off just 18.3 overs as de Kock closed unbeaten on 70.

Rajasthan – whose players and owners combined before the match to donate £700,000 to the COVID-19 relief fund in India – posted 171-4 after being put in, their efforts to cut loose undermined by an efficient Mumbai attack led by Jasprit Bumrah (1-15).

Royals openers Jos Buttler (41 off 32) and Yashasvi Jaiswal (32 off 20) built an ideal platform, scoring 47-0 off the powerplay after Buttler glanced the first ball of the match from Trent Boult (1-37) for four.

The partnership improved to 66 as Buttler, who enjoyed a life on 12, launched Rahul Chahar (2-33) for the third six of his innings only for the spinner to gain instant revenge by turning one past the edge – the advancing Englishman stumped by yards.

Skipper Sanju Samson picked up the theme, dispatching two of his first three balls for four, and keeping the run-rate ticking over at nine-an-over before Jaiswal was caught and bowled by Rahul Chahar off the leading edge as he looked to work into the leg-side.

Mumbai’s attack continued to keep the Royals’ innings in check despite a 50-run stand off 41 balls between Samson and Shivam Dube (35 off 31).

The innings was encapsulated by Boult, who cleaned out Samson with a brilliant middle-stump yorker, and Bumrah who rounded off a fine return with the wicket of Dube, who clothed a return catch back to the seamer.

De Kock sparked Mumbai’s reply into life by striking two sixes in a stand of 49 before captain Rohit Sharma chipped the final ball of the powerplay from Chris Morris (2-33) to mid-off.

Suryakumar Yadav (16) got off the mark in stylish fashion with an inside-out drive through the covers off Rahul Tewatia and the match was well-balanced with the teams level-pegging on 83-1 off nine overs.

The return of Morris for his second over earned Rajasthan a precious breakthrough as Yadav picked out Buttler at midwicket off a slower ball but there was no shifting De Kock, who reached his half-century off 35 deliveries.

The Royals spurned a tough chance when De Kock was undone by a Chetan Sakariya slower ball which the South African could only slice high into the air and Jaiswal, running back from extra cover, almost took a stunning catch over his shoulder.

De Kock had 58 runs at that stage and found a flowing foil in the shape of Krunal Pandya (39 off 26), who smote Tewatia back over his head for a mighty six and despatched Mustafizur Rahman into the stands before dragging a full ball on.

Kieron Pollard (16no off eight) delivered the concluding blows, pumping Morris over extra cover for six and striking the deciding boundary to fine leg off Mustafizur with nine balls in the locker.

Our live coverage of the Indian Premier League continues on Thursday at 2.50pm as Delhi Capitals take on Kolkata Knight Riders.