Delhi Capitals’ Chris Woakes got the better of his battle with England team-mate Jos Buttler, as the Rajasthan Royals opener managed only two before inside-edging his seventh-ball faced behind to the wicketkeeper 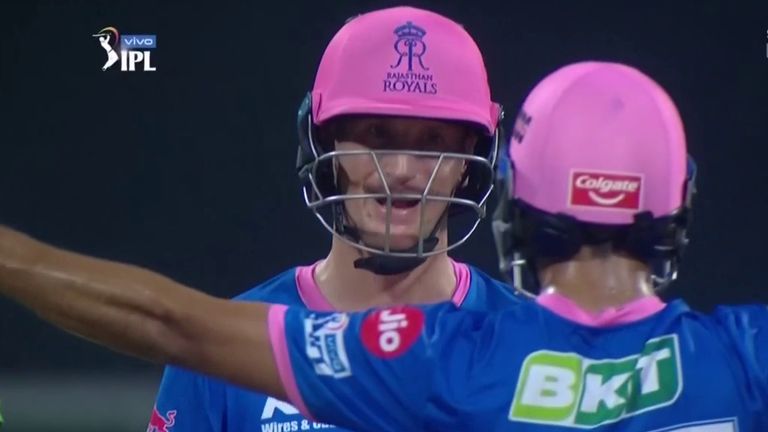 Chris Morris – the most expensive player in Indian Premier League history – justified his hefty price tag as he fired four late sixes to see his Rajasthan Royals to a thrilling three-wicket win over Delhi Capitals on Thursday.

Chasing 148 to win, the Royals looked to be heading for a second-straight defeat to start the tournament when stumbling to 17-3 inside four overs and 42-5 in the 10th, but David Miller’s 62 from 43 balls and the late cameo from £1.6m man Morris – an unbeaten 36 off 18 deliveries – catapulted them to an incredible comeback win.

Rajasthan’s hopes appeared to rest on Miller’s shoulders but, having brought up his half century in the 16th over, celebrating by striking back-to-back sixes off his next two balls, he departed to the third, still leaving the Royals with a stiff ask of 43 needed from the final four overs, with only three wickets in hand.

That equation became ever trickier two overs later, with 27 needed from the final two, but South African Morris first hammered a pair of sixes from countryman Kagiso Rabada’s penultimate over, and then launched Tom Curran (0-35) into the stands twice more in the last to win the game with two balls to spare.

It was a staggering end to the game, with Delhi surely kicking themselves for failing to capitalise on the fine work of their quick bowlers at the start of the Royals’ run chase. Chris Woakes (2-22) picked up openers, Manan Vohra (9) and England team-mate Jos Buttler (2), cheaply, while Rabada (2-30) claimed the key wicket of captain Sanju Samson (4), fresh from his hundred-hitting heroics in Rajasthan’s opening loss to Punjab Kings.

Miller – in for the injured Ben Stokes after he was ruled out for the tournament with a broken finger – led the Royals rebuild, putting on 48 for the sixth wicket with Rahul Tewatia (19 off 17). But Rabada accounted for Tewatia in the 15th over, prompting Miller’s frenzied assault in the 16th as he realised he was running out time and partners at the other end.

With the fall of Miller’s wicket, Jaydev Unadkat (11no off 7) – who earlier claimed 3-15 in a superb opening spell with the ball for Rajasthan – provided more than adequate support for Morris, even smashing a six off Woakes, though he was fortunate to survive a run out chance to open the 18th over as Capitals captain Rishabh Pant failed to field the ball cleanly as he dismantled the stumps.

Earlier, Pant had top-scored for his side with 51 from 32 balls to help lead their recovery from a similarly spluttering start. Unadkat removed Prithvi Shaw (2), Shikhar Dhawan (9) and Ajinkya Rahane (8), while Mustafizur Rahman (2-29) picked up Marcus Stoinis for a five-ball duck to have Delhi reeling at 37-4 by the six-over mark.

Pant’s efforts, plus handy lower-order contributions from Lalit Yadav (20), and England pair Curran (21) and Woakes (15no), helped the Capitals to post a competitive score of 147-8, and one that long looked to be a match-winning total until Morris’ late fireworks saw Rajasthan to a memorable first victory of their 2021 IPL campaign.