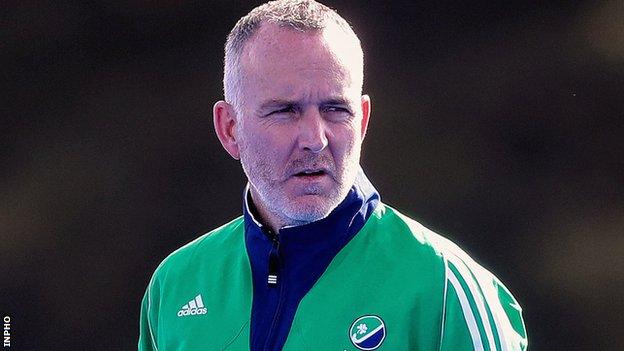 Mark Tumilty has been named Ireland men's hockey coach after stepping into the role on a short-term basis for the Olympic play-off against Canada.

The Irish suffered a controversial loss in their play-off against Canada last October after the awarding of a last-second penalty stroke in normal time.

Tumilty's term was extended to December before Wednesday's announcement.

The coach's main focus in 2021 will be preparing the squad for the European Championships in August.

"It is an honour and privilege to be given the opportunity to coach the Ireland's senior men's team," said the Ulsterman.

"I want to develop an attacking style of hockey and to create an environment for all players to fulfil their potential during our preparation for the 2021 European Championships."

"Despite the disappointment of the unsuccessful qualification for Tokyo 2020, it was very clear from existing players and staff feedback that the leadership of Mark was well received leading into Vancouver qualifiers and subsequently," said the Hockey Ireland performance director.

The global pandemic has severely restricted activity for the Ireland men's squad but Hockey Ireland is hoping to be able to step up work in the weeks and months ahead.

After Ireland's play-off defeat in Vancouver, Tumilty said players in his squad had "given up careers and relationships" to chase their Olympic dream.

After winning the first leg 5-3, Ireland were already celebrating a 6-5 aggregate win when Canada asked for a video referral after Lee Cole's challenge on James Wallace inside the Irish circle.

Video umpire Diego Barbas astonished the Irish by awarding a penalty stroke, which Canada scored before prevailing in the subsequent shoot-out.