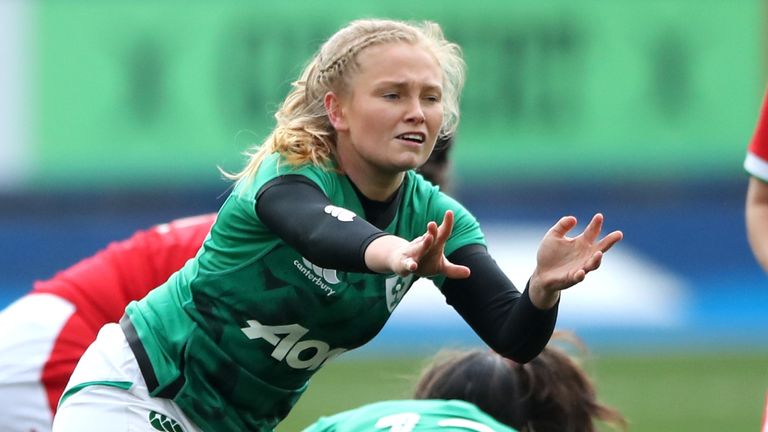 Kathryn Dane in action for Ireland

A horses for courses approach to the half-back pairing could be the key to bringing the best out of Ireland going forward, according to scrum-half Kathryn Dane.

The 24-year-old has been a regular in the Ireland set-up since making her debut in 2019, starting all four games Ireland played in last year’s disrupted Women’s Six Nations, and starring alongside No 10 Hannah Tyrrell in last weekend’s 45-0 win over Wales.

But, while Dane has seen off competition from Nicole Cronin and Ailsa Hughes to hold the No 9 jersey, the fly-half situation has been much more fluid since her international bow.

Dane has started alongside four different fly-halves during that time yet, rather than bemoaning the lack of consistency, she believes it demonstrates Ireland’s wealth of attacking options.

“It’s a great honour [to have a run in the team] and it’s amazing that I have been able to remain injury free and build really good partnerships with the 10s and the rest of the group,” she said. “As nines, we’re all sharing with each other and making sure we’re up to scratch and ready to take on any challenge as it comes up, but I’m delighted to have gotten those starts.

“It’s really lovely to be part of such a competitive squad. I do really appreciate being able to bond with the 10 and it makes a massive difference, you almost get into a flow state with somebody.

“You don’t even need to look to see where they are, you just know what they’re going to do next, but it does take time to build that level of relationship with your 10.

“We’re just in such a privileged position that the 10s in Ireland are diverse and offer such amazing skill-sets, so depending on the game in hand one player may offer something different to another.

“We’ve all got unique skill-sets, like myself I probably differ quite a bit from the other nines, so it’s just about trying to utilise players to the best of the team.”

Ireland’s opening game of the 2021 Women’s Six Nations against Wales saw Adam Griggs’ side finally take to the field after putting in the work across 20 training camps.

And with the Championship taking place in April for the first time and the announcement of World Rugby’s new WXV tournament, Dane is excited for the future of the women’s game.

“It’s finally putting the women’s game on its own pedestal and respecting it in its own right, which is great and what we want,” she said.

“The prospect of more Test games and the chance for more game time is exciting. For me, I’m 24 and I have lots of years to give to the game and the thought of more caps is just amazing, so I’m really looking forward to it.”

But the question of professionalism still looms large over the women’s game, with England and France already showing the gap to the rest of the nations in this year’s Championship.

Should Dane, who juggles her rugby commitments with a physiotherapy internship and a PhD at Trinity College, be offered a full-time contract, however, she would jump at the chance.

“I know the IRFU are doing everything they can to make sure we are matching the other nations,” she said, when asked about the possibility of following in England’s footsteps.

She continued: “My first instinct would be yes [if offered a full-time contract by the IRFU in the future], I’m even getting butterflies in the tummy now just thinking about it.

“From a young age rugby has meant everything to me so it probably isn’t as big a decision for me as it is for other girls perhaps, for those in more senior jobs.

“Or other people with families and other commitments, it’s probably a more difficult decision but for me as a physiotherapist and PhD student I can definitely see myself making it work.”

For now, though, Dane insists Ireland are doing the best with the resources they have at their disposal and is confident they can upset the odds in this year’s Women’s Six Nations.

“[The gap] is definitely there but I’m not too concerned, I’m just worrying about us and what we can do and the IRFU are giving us the resources we need to perform at the minute,” she added.

“The picture might change in a couple of years and we might be operating at that same professional or semi-professional level as England and France.

“But for the time being we’re doing great with what we’ve got so it’s not a concern for us now. I feel like we’re in the strongest position we’ve ever been as a squad.

“We’ve had time to grow as a team and we’re really feeling up for an upset.”