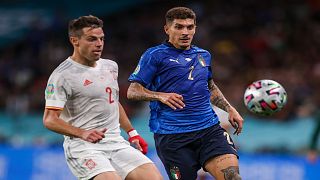 Jorginho converted the decisive penalty kick Tuesday to give Italy a 4-2 shootout win over Spain and a spot in the European Championship final.

The midfielder took a trademark hop at the end of his run-up before rolling the ball into the bottom corner.

The match had finished 1-1 through extra time. Federico Chiesa scored for Italy with a curling shot in the 60th minute but Alvaro Morata equalised for Spain in the 80th.

Morata missed the next-to-last kick in the shootout, giving Jorginho the chance to win it.

Italy will be back at Wembley Stadium for the final on Sunday against either England or Denmark.