Roberto Mancini looked dishevelled for the first time at Euro 2020, Italy's immaculately-attired coach drained of energy after the triumphant conclusion to a night of high tension and huge quality at Wembley.

Mancini was thrown about by his jubilant players after Jorginho's ice-cool spot-kick in the penalty shoot-out settled a magnificent Euro 2020 semi-final in Italy's favour at the cruel expense of Spain.

This was pure theatre, with a 60,000 crowd at Wembley adding colour to the fight to face either England or Denmark in Sunday's final, the stadium splashed with the red of Spain at one end and the victorious blue of Italy at the other as crowds flocked back in ever bigger numbers after pandemic restrictions were lifted.

Italy's eventual win was worthy of an audience filling Wembley twice over, the joy of Mancini and his players a brutal contrast to the despair of much-derided Spain striker Alvaro Morata, who had actually rescued them with an equaliser in normal time after Federico Chiesa's superb opener for Italy.

Italy into Euro 2020 final with penalty shootout win over SpainDid Jorginho score a 'Ballon d'Or-winning' penalty?Relive the action from Italy's win over Spain

In the final reckoning, Spain paid the price for the Achilles heel that troubled them in the early stages of this competition, namely an inability to crown glorious passing and approach play with an end product.

So it is Italy who go through to the final – and what a formidable obstacle they will present to either England or the Danes after a result that leaves them unbeaten in 33 games under the inspirational leadership of Mancini. 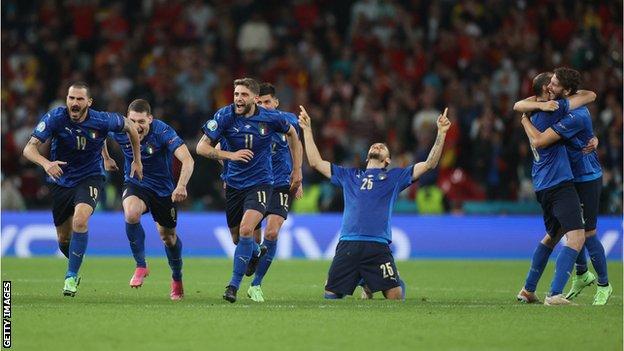 Mancini has pieced together a fiercely-drilled, unified team with a real "all for one and one for all" attitude, summed up by the veteran central defensive pairing of 34-year-old captain Leonardo Bonucci and his long-time partner, the great 36-year-old Giorgio Chiellini.

It is easy to imagine them, once their footballing deeds are over, on either side of the doors of a high-quality Italian establishment, endlessly polite but with the distinct air of a duo who have no intention of standing aside under any circumstances unless they decide to.

Chiellini, who made his Italy debut in November 2004, still plays with desire and hunger but also with a smile on his face, relishing every second of every challenge, each battle to be won.

Just before the penalties began, a beaming Chiellini grabbed Spain defender Jordi Alba in a good-natured (well it looked good-natured) bear hug before the usual agonies of the shootout.

Bonucci, Mancini's leader, looks the calmer of the pair as he proved with his penalty, but despite a combined age of 70, the years show no sign of withering their quality or their ability to take every goal conceded as a personal offence.

Italy were the beneficiaries of Spain's lack of cutting edge but had so much quality of their own in all areas of the pitch, summed up by a sweeping counter-attack started by goalkeeper Gianluigi Donnarumma and finished by Chiesa on the hour.

How the vast Wembley crowd loved it as the action swept from end to end, the odd chants of "It's Coming Home" from a few England fans shouted down by some pantomime booing from Italian and Spanish fans, with the 30 minutes of extra time an added treat.

Tired legs and a more cautious approach made this a more conservative affair in those 30 minutes but so much credit goes to both sides, and coaches Mancini and Luis Enrique.

Italy's potential opponents in Sunday's final might hope this game has taken a lot out of Mancini's men but you would not bank on it from a side who have simply got better and better, now adding Spain to Belgium as they claim victims of the highest class en route to the showpiece.

The wild scenes at the end, which even threatened to claim Mancini's pristine white shirt at one point, demonstrated how this Italy side feel the force is with them.

How they celebrated in front of the elated Azzurri fans, with the wonderful sight of legendary former striker Gianluca Vialli – back after undergoing treatment for cancer and now part of Italy's backroom team – right at their heart.

Italy's progress throughout Euro 2020 has been gathering momentum from their opening win against Turkey and after overcoming Belgium and Spain in the knockout stage they will fear no-one and rightly so.

Now it is over to Denmark and England at Wembley on Wednesday night, both knowing a huge blue barrier awaits whoever reaches Sunday's final.