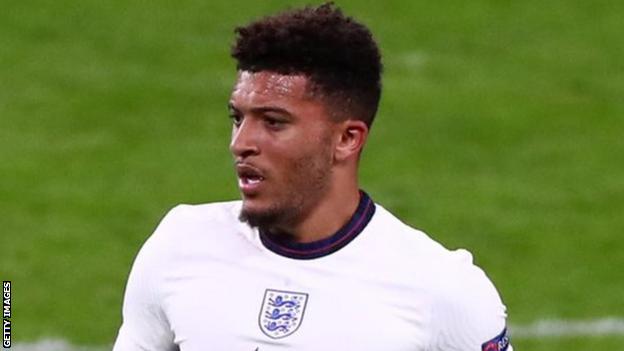 England winger Jadon Sancho has had a medical as his £73m move to Manchester United from Borussia Dortmund edges closer.

United agreed the fee for the 21-year-old on 1 July but the deal could not be concluded until after Euro 2020.

Sancho was driven into United's Carrington training complex on Tuesday and was later pictured leaving.

Sancho had a penalty saved along with Bukayo Saka as England lost to Italy in a penalty shootout at the Euro 2020 final.

Marcus Rashford missed his penalty at Wembley on Sunday and all three players were targeted on social media after the game.

Although he was a team-mate of Phil Foden at Manchester City prior to his exit for Dortmund in 2017, Sancho never played a first-team game for the Blues.

His only competitive club game in England came in a Champions League defeat by Tottenham at Wembley in February 2019.

Sancho was injured for both legs of Dortmund's quarter-final with Manchester City last season.