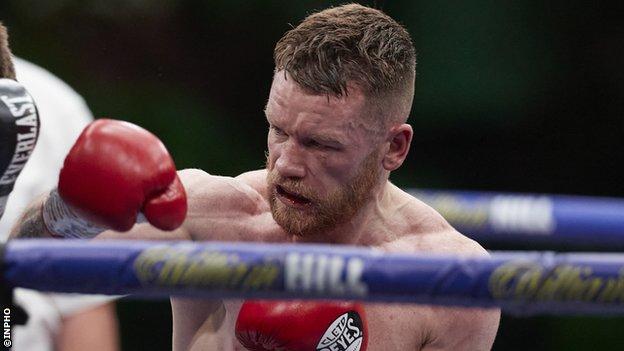 The fight was stopped seconds after Tennyson, 27, just about beat the count after being knocked down by the Mexican.

Both fighters landed strong punches in the early exchanges before Straffon caught him with a big left hook.

The bout opened the undercard of Joseph Parker's victory over Derek Chisora.

Tennyson had previously fought for the IBF world super-featherweight against Tevin Farmer but was beaten by a fifth round stoppage in 2018.

He went into Saturday's encounter having stopped Josh O'Reilly in the first round of their WBA world title eliminator in December.

Despite displaying his ferocious punching style from the outset, he was met with a strong response as the defeat takes Tennyson's professional record to 28-4.

The Belfast man's corner could clearly be heard telling him to pace himself amidst a gruelling opening two minutes just before the Straffon punch that put him down.

The IBO does not sit within boxing's four main world titles but noteworthy names have won it in the past.