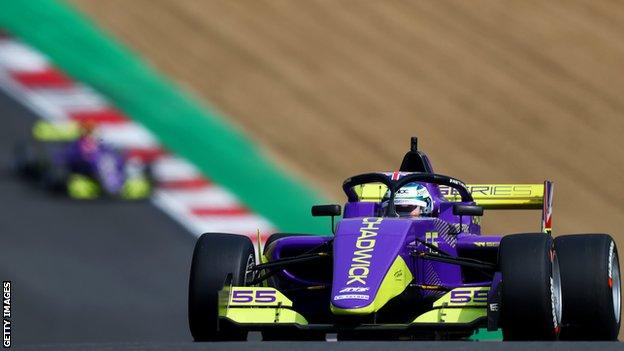 Jamie Chadwick says she hopes the "stars will align" after a securing substantial backing to reach Formula 1.

The 22-year-old will compete in regional Formula 3 from this August, with the aim of rising up to International F3 and F2 with Prema.

The British driver, who won the female-only W Series last year, tested a car developed by Rodin in New Zealand in March, leading Dicker to claim she was an "exceptional talent".

Watch the W Series Esports League on the BBC

Rodin are aiming to produce the world's fastest track car and to make it commercially available, and partnered Chadwick as a driver who could help with on-track feedback.

Australian Dicker, who made his fortune in IT, said: "Jamie is an exceptional racing talent. We are taking a long-term view on this in fully supporting her journey as she moves up the ladder towards F1."

Chadwick, who is also a development driver for the Williams F1 team, said the opportunity put in front of her was "black and white" in terms of how much it enhanced her prospects of being the first female driver to compete in a Formula 1 race since Lella Lombardi in 1976.

"It's a dream come true, really. If I had a smaller budget I couldn't race with a top team like Prema and give myself the best chance to perform and justify being in F1."

Prema are one of the most successful lower formulae teams, and have progressed the careers of several top drivers, including current Ferrari F1 driver Charles Leclerc.

"The scary thing with motorsport is the financial backing required. It's an insane amount, but it's so exciting to have been given an opportunity to do it with Prema.

"To drive in Formula 3, for example, you're looking at double what I got in W Series prize money," she added. Chadwick was awarded £500,000 for claiming the W Series title.

The Prema team are affiliated with Ferrari and Mercedes

Chadwick also revealed she nearly did not make the trip to New Zealand at all after taking a flight hours before lockdown was announced across multiple countries amid the coronavirus pandemic.

"I did get stuck in New Zealand. It was a very close call whether I was going to go – I was on the flight when I found out that six hours after I actually landed there you'd have to go into quarantine for 14 days and I would not have gone.

"To be honest it was a helpful time. It was a bit of a shame they went into lockdown – driving cars around all day would have been a great life – but sadly I couldn't do it. But it definitely helped with the conversations.

"It's the most exciting moment of my career, and gives me security and structure. Every year I've gone racing I've always had that uncertainty [of what I could do the following year], but now I have structure and support, and I can focus on performing my best."