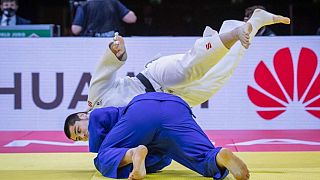 Day 7 of the World Judo Championships in Budapest was the turn of the heavyweights. Kageura Kokoro’s ambition was to give Japan its first World Championship gold in this category since 2003.

Earlier this year Kaguera became the first man in a decade to beat France’s Teddy Riner and he looked in fine form as he powered his way to the final.

There he would take on Tamerlan Bashaev of the Russian Judo Federation. An explosive thrower himself, Bashaev continued his recent good run of form, seeing off the tough young Georgian judoka Gela Zaalishvili to book his spot in the final.

Victory is dedicated to coach

But a waza-ari score from Kaguera would prove decisive, as he finally brought the heavyweight world title back to Japan.

Inoue Sensei couldn’t win gold in his last world championships in this category. So I won this gold for him, and I am very happy.

Siteny Randrianasoloniaiko, President of the African Judo Union, presented him with his medal. Kaguera dedicated his win to his coach.

“Inoue Sensei couldn’t win gold in his last world championships in this category”, said Kaguera, “So I won this gold for him, and I am very happy.”

Tomita Wakaba was the first of a Japanese double act to make the final in the women’s heavyweight division. She looked great, throwing her larger opponents with classic Japanese judo to set up a showdown with Sarah Asahina, the 2018 World Champion.

Asahina looked to be back on form, scoring with some big throws as she showed the world that she still has what it takes to win gold.

The final itself was a stalemate with the pair cancelling each other out, Asahina eventually winning when Tomita received a third penalty. The highlight was the touching sportsmanship on show when Asahina carried her injured teammate from the Tatami.

I’m relieved to get back my red back patch.

“Well I’m very happy, but also I’m relieved to get back my red back patch again”, she said. “So I’m very relieved.”

There was a moment for Ukraine to savour as Yakiv Khammo produced an amazing ippon to win a bronze medal.

It was a great end to the individual competition. Next up, the excitement and drama of the mixed team competition.