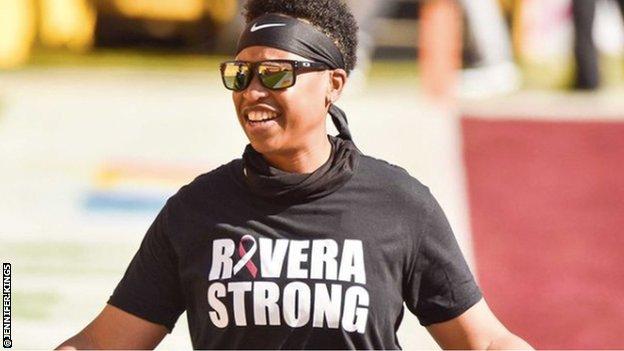 Jennifer King has made history by becoming the first black woman to be appointed a full-time coach in the NFL.

Her promotion to assistant running backs coach was confirmed on Tuesday by Washington Football Team.

She spent the 2020 season as an intern under Washington head coach Ron Rivera, and running backs coach Randy Jordan.

"Coach King is well deserving of the promotion," said Rivera. "She earned this opportunity with her hard work. The sky is truly the limit for her."

King is part of a growing number of women earning coaching opportunities within the NFL and the appointment to a full-time paid role makes her the second woman in the NFL to become an assistant position coach, after Lori Locust was appointed assistant defensive line coach for Tampa Bay in March 2019.

They were on opposite touchlines in the first round of the play-offs and among a record six female coaches on teams to play in the post-season.

In a statementexternal-link on the Washington Football Team website, 36-year-old King said: "It's a direct testament to those coaches who are forward thinking and opening up the entire pool when they're looking for people, to hire people to make their programmes better.

"I don't think it's an oddity that those play-off teams had so many female coaches involved because those coaches created cultures of growth and inclusion, and those things generally create wins."

King was a quarterback, receiver and safety during 12 years as a player, winning two national championships with the Carolina Phoenix and New York Sharks.

She was a basketball coach before first working with Rivera as an intern helping to coach receivers at the Carolina Panthers in 2018.