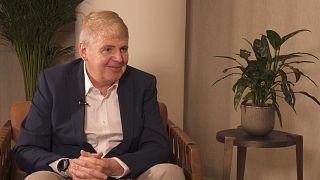 Jim Mellon is a billionaire investor, a businessman, a philanthropist and an author of several prominent books. He also shows the ability to successfully identify emerging global trends.

In an exclusive interview with Euronews, he talks about his aspirations for the future and gives some insight into his new book entitled ‘Moo’s Law: An investor’s Guide to the New Agrarian Revolution’.

The end of traditional farming

To give us a bit of background to his new book and the ‘New Agrarian Revolution’, Mellon mentions the pandemic. “Where did that pandemic come from? Probably from food malpractice in the Far East. Where will the next pandemic come from? Probably food malpractice in the Far East”. Mitigating future pandemics is one of the reasons he thinks that in the next ten years, “half of the world’s meat will be plant-based” or from “cell-based agriculture where the meat is produced in laboratories”.

He tells us that moving to plant-based solutions is also the way to make sure humans don’t consume antibiotics through farmed animals.

He argues that growing meat in laboratories would have a radical impact on climate change as “20% of all the global emissions that cause the global warming that we are all worried about at the moment come from intensive farming of animals”.

Mellon is convinced that today’s agriculture is going to go through a huge upheaval and he even predicts that traditional milk farming will disappear entirely because “it’s an industry that’s in terminal decline”.

Mellon is also involved in more medical and pharmaceutical fields. His company, Juvenescence, is focused on helping people live healthier in old age. They expect to do this through stem cells and through pharmaceuticals that remove senescent cells, “which are cells that we get more of as we get older, and they cause things like osteoarthritis”, he explains.

It is his hope that if people get healthier in old age, more money can be diverted to empathetic care and social care. He wants less “to be spent on end of life care, which is two-thirds of all our health expenditure”.

When asked whether the UK will be able to bounce back from the pandemic and Brexit, Mellon says that it is already back to “the level it was pre-pandemic”. According to him, Europe is still a bit behind but that is due to its vaccination programme that is a bit behind.

His major concern is inflation, a worry shared by many other economists like Ngozi Okonjo-Iweala, the Director-General of the WTO. In order to finance recovery, he says “you print a lot of money” which devalues that money. To him, the decision to do this is a judgment call. Coming out of the pandemic, he thinks that the reins need to be tightened and he highlights that inflation is very destructive “particularly to poorer people because it ruins the savings of the poorer people. It just wipes them out”.

Despite all the major changes that Mellon has predicted over the next ten years, he believes that everyone will adapt and that the changes will be positive.

Mellon tells us that progress creates new, better and higher-paid jobs. To him, “there will be change, but change is always good”.

To watch the full interview with Jim Mellon, click on the media player above.