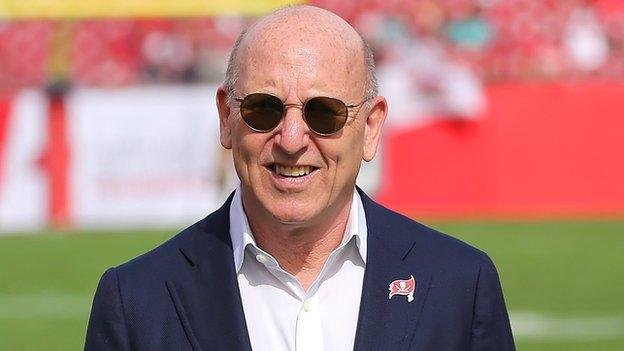 Manchester United co-chairman Joel Glazer will make his first fans forum appearance in his 15 years as owner of the Old Trafford club on Friday.

Glazer vowed to be more receptive to the club's supporters in the wake of the European Super League fiasco.

Demonstrations were held against the Glazer family, which forced the postponement of the Premier League game against Liverpool on 2 May.

He has since apologised for United's involvement.

Subsequent home games against Leicester and the re-arranged Liverpool game were played but amid an enormous security presence. Manager Ole Gunnar Solskjaer and his squad had to prepare for the Leicester match at Old Trafford after arriving at the ground hours before the evening kick-off.

Songs were sung against the Glazer family during the final home game of the season against Fulham.

The family are under huge pressure to spend significant sums this summer, both on the stadium, which has been showing signs of wear and tear, and to improve Solskjaer's squad.

BBC Sport understands Solskjaer has identified four areas of improvement – in attack, central midfield, central defence and a right-sided attacking player – although the Norwegian, who is set to get a contract extension this summer, accepts addressing all these issues will be difficult given the enormous impact Covid-19 has had on the club's finances.

One player who is of significant interest is England international Jadon Sancho.

It is understood Borussia Dortmund have a gentleman's agreement with Sancho that he will be allowed to leave if a club meets their valuation before a specific point of the summer.

Last year, that was the start of pre-season training in July. United felt there was likely to be some flexibility in Dortmund's position but that proved to be incorrect and Sancho remained at the club, where he impressed over the final weeks of the season as BVB won the German Cup and, importantly, secured a place in next season's Champions League.

It remains to be seen whether Glazer will address any of these issues at the fans forum or whether those present on the virtual call will be allowed to ask questions.