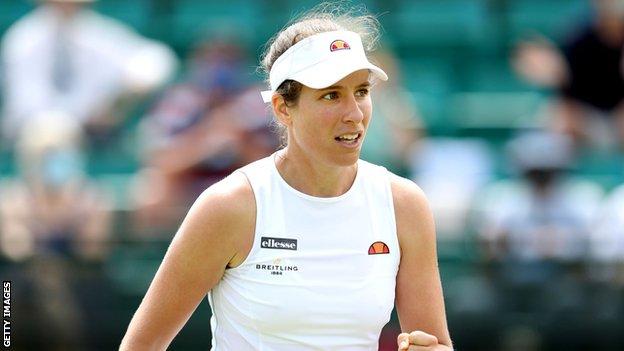 Konta, 30, cruised through the first set against Van Uytvanck, 27, but the world number 67 played a tighter second set to force a tie-break.

Konta won on her fourth match point to reach the semi-finals for a third time.

"I tried to keep creating opportunities hoping I was going to take some," she said.

This is the world number 20's best result this season, having not won back-to-back matches until now.

She continued: "I'm just trying to play as many matches as possible, because I know with matches you also gain that bit of match fitness and that much more tightness in your game to be able to make good decisions at the right time."

She faces the winner of the match between Serbia's 15th seed Nina Stojanovic and the Czech number 17 seed Tereza Martincova.

Katie Boulter, who overcame fellow Briton Heather Watson to reach the last eight, will meet the winner of the all-American battle between Lauren Davis and second seed Alison Riske, which was carried over from Thursday.

Konta, together with Watson, Boulter and Harriet Dart, are all in action again next week at the Birmingham Classic, where Konta will be the number two seed.

They are joined by former Grand Slam champions Sam Stosur from Australia and Latvia's Jelena Ostapenko.