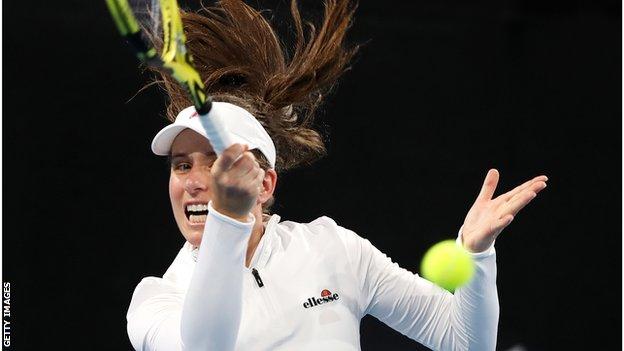 Konta had won two of the pair's three previous meetings

Britain's Johanna Konta lost out to American Shelby Rogers in Adelaide in her first match since her Australian Open retirement.

Third seed Konta was beaten 6-2 6-2 by the world number 53 in the last 16 of the Adelaide International.

She was forced to abandon her opening round match in Melbourne with an abdominal injury.

And although Konta showed few ill-effects from that, Rogers' return proved the stronger.

She broke early in the first set, going 3-1 up and holding her advantage and did the same in the second set, taking a 3-2 lead and winning the last three games to continue her good start to 2021.

The 28-year-old reached the fourth round at the first Grand Slam of the year before losing out to top seed Ash Barty.