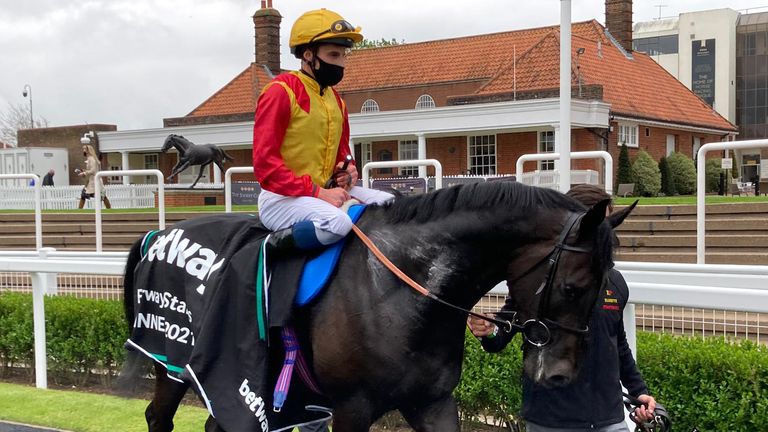 Ed Dunlop is counting down the days until the Cazoo Derby with John Leeper following a pleasing racecourse gallop at Epsom on Monday.

Bred in the purple as a son of Frankel out of the trainer’s 2010 Oaks heroine Snow Fairy, the three-year-old has earned himself a crack at the premier Classic with spring victories at Newcastle and Newmarket.

With just three career outings under his belt, Dunlop was keen to give his charge a feel for the undulations of Epsom before the big day and was delighted with what he saw.

He said: “We were never going to do too much, whether the ground was nice or not, as he only ran the weekend before last. This was about bringing him to get a bit more experience with Adam (Kirby) on him. The ground was very soft, almost heavy, but he looked to enjoy himself.

“Hopefully everything will be OK and we will be back here on the first Saturday in June. He is an inexperienced horse, but what I was pleased to see today was that he has been very relaxed doing the whole thing.

“He is not a baby, but everything was new to him today. I was thrilled with the way he behaved and he wasn’t keen going down the hill, which was good as they were only going slowly.

“He has got to step up markedly to be competitive in the Derby, which at the moment the Irish look like they have a stranglehold on. We will just keep him fit, healthy and sound leading up to the race and the rest will be up to the Gods.”

Given the exciting colt is named after the Newmarket handler’s late father John Dunlop, there are likely to be plenty of tears in the winner’s enclosure should he strike Derby gold on Saturday week.

“It is probably one of the more interesting stories of the race,” Dunlop added.

“Having a horse named after my father is very exciting, and it creates a little bit of pressure for everyone, but at the moment the horse has no idea there is any pressure on him, so hopefully we can enjoy it.

“Of course it is quite emotional and it would be a great day if he could go on and win the Derby.”

John Leeper will be ridden by Adam Kirby, who also partners Saffron Beach in the Cazoo Oaks.

He said: “I’ve got two very nice horses to ride at Epsom this year, so let’s hope we have a bit of luck on our side.

“It was brilliant when I got the call to ride John Leeper. I didn’t know whether Ed was winding me up as he has got that in him, but luckily he wasn’t! It is a great ride to pick up and thanks to Ed and all the connections.

“Today was the second time that I have sat on him. I was really pleased with him. He settled lovely on the way down. He didn’t get worked up or in a stew. He relaxed beautifully in behind and when I pulled him out in the straight, he gave me a really good feel.”

Another Derby hopeful to enjoy a Monday morning spin over the famous Downs was the Charlie Appleby-trained One Ruler.

The son of Dubawi will be running in his second Classic, having finished a respectable sixth in the 2000 Guineas at Newmarket.

Reflecting on his morning workout, Appleby said: “I was very pleased with what I saw there. He is a naturally balanced horse, but he hasn’t encountered anything like that before.

“The whole object of the exercise was to let him have a look at the track, but more importantly he was fresh in the Guineas.

“We already had it in our mindset that we were going to come straight from the Guineas to the Derby. We felt that bringing him here would ensure we wouldn’t be going into the Derby too fresh.

“He is a horse that has form on soft ground, so these conditions weren’t going to worry us. He has moved well on the track and picked up well up the straight there. Visually, I don’t think you could be any happier with what we saw really.”

The Moulton Paddocks maestro admits to having some doubt about whether One Ruler’s stamina will last out over a mile and a half, adding: “If the race was 10 furlongs you would be delighted. It is going to be a big question mark, the mile and a half.”

James Doyle partnered the colt in his gallop and will do so in the Derby, with William Buick siding with his Dante-winning stable companion Hurricane Lane.

“William had the choice of them and we spoke about it,” said Appleby.

“Without putting too much pressure on William, I said it would be helpful from the team’s point of view to make a call as it gives James the chance to ride him here if he is going to be riding him in the Derby.

“William said it is not very often that you get the chance to ride a Dante winner in the Derby, so his mind was firmly set on staying with Hurricane Lane and therefore James is first man to be jumping up on One Ruler.

“I’m delighted with Hurricane Lane. As you saw at York, he is one of those characters that is very laid back. He just goes about his business, but he has come out of the race very well and I’m looking forward to getting him here.”

Appleby will be bidding for a second Derby victory following the success of Masar in 2018.

He added: “The day of Masar was one we will never forget from myself, my family and the team’s point of view.

“He was the first horse to win in the Godolphin blue and for His Highness (Sheikh Mohammed) and the Royal family to be here, it was a very special occasion.

“We all know winning the Derby is something everyone would love to have on their CV.”