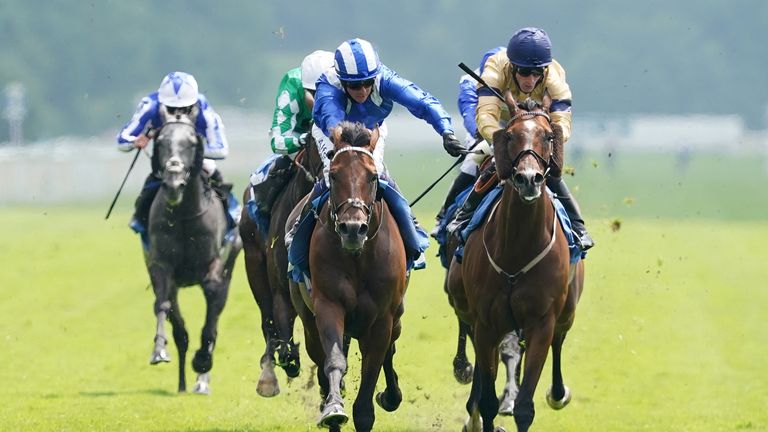 The Shadwell-owned colt is also already a Listed winner and was last seen finishing third behind Wonderful Tonight in the Hardwicke Stakes at Royal Ascot.

Ridden by Jim Crowley and trained by Owen Burrows, the four-year-old finished a length and three-quarters ahead of Archie Watson’s Outbox.

“He’s such a consistent horse,” Burrows said of the 3-1 favourite. “That was a big run at Ascot and the form is working out well.

“He’s a Group Three winner again, he travelled well and he did it nicely.

“This ground helps, it’s better than it was at Ascot but you can’t say he doesn’t handle it, he’s just better on nice, lovely, good ground.”

La Trinidad continued his progression to take the John Smith’s Racing Handicap at 13-2 for Rowan Scott and Roger Fell.

The gelding was victorious last month on the Knavesmire, striking in a nine-furlong handicap to earn himself a 6lb rise in the weights, but the increased burden did little to hinder him in sealing back to back York wins when he prevailed by half a length.

“I was bullish about him,” Fell said. “La Trinidad is going the right way, I’ve always thought he was a good horse.

“We won’t over-race him and he could win a nice race.”

The five-year-old has been campaigned on the Flat since a heavy fall under the National Hunt code at Musselburgh in January and gained a second victory on the level when taking the extended two-mile contest by three-quarters of a length at 12-1.

“He just lost his way, he had a terrible fall at Musselburgh that just wasn’t his fault,” McCain said. “He lost his confidence completely with jumping, he was getting so high in the air, but the ability is still there.

“He won the Scottish Champion Hurdle trial up at Ayr and he looked like he was going the right way but he’s gone the wrong way because of that fall, so it’s just nice to get him back on track – we’ll look for another one now.”

Atomic Lady (9-2) backed up her first career success at Ripon last month with another win, this time taking the John Smith’s Nursery Handicap by a length and three quarters.

The filly raced alone towards the outer rail for much of the race and saw off a challenge from 7-2 joint-favourite Silken Petals to prevail.