Chris Smalling on Jose Mourinho and the Euros Italian banter

Chris Smalling was "surprised" and "excited" by Jose Mourinho's appointment as Roma manager ever though he knew it meant their uneasy relationship at Manchester United would be dragged up.

Mourinho has replaced Paulo Fonseca at the Serie A side as Roma's ambitious new owner, billionaire US film director and producer Dan Friedkin, tries to fulfil his pledge to make them "one of the greatest names in world football".

Smalling, 31, spent two-and-a-half years under Mourinho at Old Trafford. He made 100 appearances for United during that time.

Yet much of the focus has been around a disagreement between the pair over Smalling's willingness to play through pain. Smalling said he was, Mourinho suggested otherwise.

Speaking to BBC Sport, Smalling is adamant there are no issues with the Portuguese.

"He is a born winner. He likes to push everyone to the limits. That is what he has done throughout his career and it has reaped results." 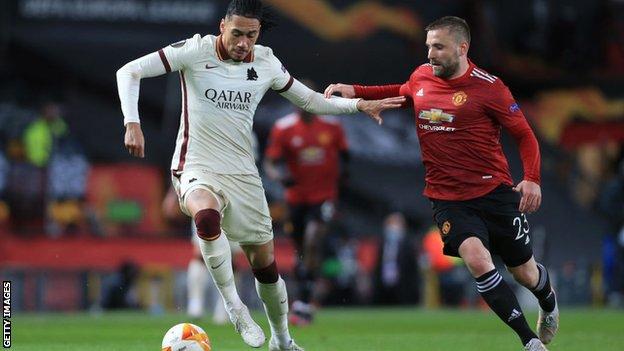 Like many observers, Smalling was caught off guard by Mourinho's appointment on a three-year contract.

But he believes it makes sense for a club that has finished outside the top four in Serie A for the past three seasons and has not won a trophy since a Coppa Italia triumph in 2008.

"It was quite a surprise to a lot of us, but there was initial excitement from everyone," said Smalling.

"I knew the media would build up something about our relationship in the past. But from a personal point of view, it is a good thing because I have played under him.

"We have won trophies together. He made me captain in one of those finals – the 2017 EFL Cup final – as well, so having the chance to play under someone who you know is good, has been so successful and is so determined to win trophies at all costs is a positive.

"I know how big a deal it would be to bring a trophy of some sort to the club.

"Jose's history shows the club has picked the perfect man to do that."

Smalling says former team-mates were curious about his veganism

Smalling is about to start his third season with Roma, having initially moved to the club on loan from United in 2019.

He remains the only Englishman in Mourinho's squad. And, while there are nine other nationalities following Rui Patricio's arrival from Wolves, the bulk of the squad is Italian.

With the backroom staff as well, it meant Smalling has been enduring a rough ride since England's Euro 2020 final defeat by Italy.

"I knew I would have to face the music," said Smalling, who played 31 times for his country.

"On Monday a lot of people were quite respectful because they knew I would be disappointed. But now it has started to settle. [Leonardo] Spinazzola came in on his crutches and gave me a bit of stick. Thankfully he kept his medal away."

The foundations are in place

Smalling says he has fully recovered from the knee and thigh injuries that contributed to the "massive frustration" of being limited to 21 games in all competitions last season.

And, while there is plenty of time before Roma open their Serie A campaign against Fiorentina on 22 August, he is confident about the future with Mourinho, 58, now in charge.

"For large parts of the last two seasons, we were very consistent and weren't far off," he added.

"Now it is about having the mentality of making sure when we do go through those tough times, and maybe we aren't quite creating enough chances, we need to stick together.

"Now it is about finding that consistency. Hopefully with Jose and his staff we do that because it is such a great club.

"There is a good feeling around the club. All the foundations are there. It is just a case of bringing it all together now."