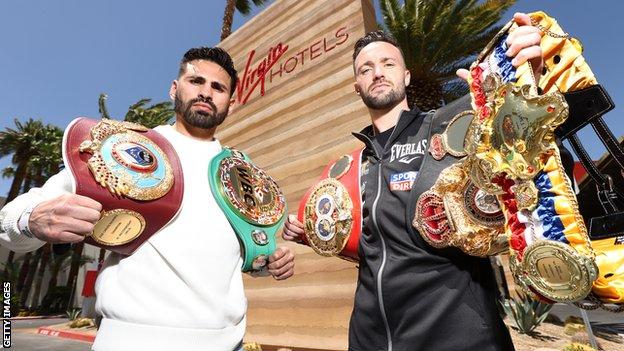 Josh Taylor says he has yet to demonstrate his full potential and believes he will produce a "career-best performance" to vanquish Jose Ramirez.

All four light-welterweight world titles will be on the line in Las Vegas on Saturday.

The winner will become only the fifth man in history to become undisputed world champion in the four-belt era.

"I've had good performances but still don't believe I've boxed to the best of my ability," Taylor tells BBC Scotland.

"I've not reached my full potential yet. When I fought Ivan Baranchyk, I could have made that fight so much easier. I could have changed up the tactics a little bit in the Regis Prograis fight as well and won that a little bit easier too."

Where does Taylor rank in Scotland greats?Taylor v Ramirez on BBC Radio 5 LiveTaylor's rise from Edinburgh hut to greatness

While much of the build-up has centred on a theme of mutual respect, the fighters shared an intense first face-to-face at Thursday's press conference, with the pair involved in a later scuffle outside.

The Scot says that, while he respects 28-year-old Ramirez, he believes he will have too much for his American-Mexican opponent.

"I'm feeling nice and relaxed and supremely confident ahead of Saturday, I can't wait," he reveals. "I'm really looking forward to this fight.

"There will definitely be some fireworks in there, 100%. But I think I know what to expect from Ramirez – he's going to come forward and put the pressure on.

"He'll try and break me down, put me on the back foot up against the ropes. That's what he's going to bring, but I'm fully prepared. Whatever he brings I'm ready for."

The bookmakers make Taylor favourite to emerge victorious on Saturday, but Ramirez is unconcerned with how others see the fight unfolding.

"I've never been a fan of opinions of who is the best fighter out there," Ramirez says.

"I can't afford to lose. That's always been my mentality. I always find a way to win."

Ramirez holds the WBC and WBO world light welterweight belts and fancies his chances of adding the other two.

"I believe a fighter like Taylor will bring out the best in me," he adds. "You will see all my skills and I will put on a show against a great fighter.

"It's an honour for me to face a great fighter like Taylor. This will be the best fight of the year."