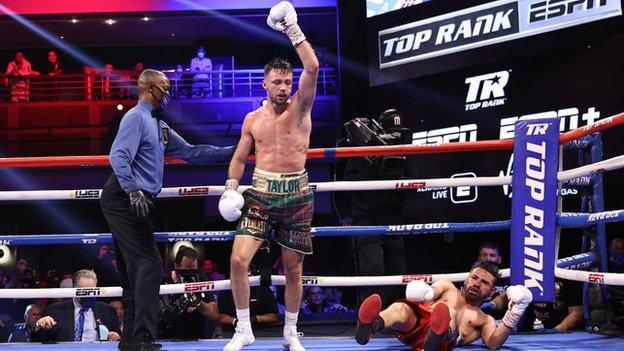 The Scot knocked down the American in Las Vegas with two devastating left hands on his way to recording a 114-112 score on all judges' cards.

Taylor, who is undefeated in 18 bouts after inflicting Ramirez's first loss, is just the fifth man in the sport to hold all four belts in a division.

Victory in the epic contest at the Virgin Hotel in Nevada, fewer than seven years on from winning gold at Glasgow's Commonwealth games as an amateur, means Taylor retains his IBF and WBA titles while adding the WBO and WBC belts to his cabinet.

Question marks were raised about the promotion of the event, billed as bout of the year, with fellow Brit Billy Joe Saunders fighting in front of a record indoor US crowd with Saul 'Canelo' Alvarez a fortnight prior.

But there were no doubts about the quality fight fans were about to witness, with four world title belts on the line and two unbeaten records consisting of 43 contests between two pristine fighters in their prime.

There was everything to lose in Nevada, but glory was also within the grasp of two men at the peak of their powers.

Often fights with so much on the line can take time to heat up, but this one hurled out the blocks as the bell echoed out, both fighters catching each other with body shots early.

Underdog Ramirez started aggressively, catching Taylor with a jab late in the first round and continuing to impress in the second by giving the Scot trouble with a flurry of shots up against the ropes.

The American further pressed Taylor in the third, opening up and lunging forward to land a strong left hand before pressuring the Edinburgh fighter, again on the ropes, and ending the round with a strong uppercut.

Resurgent Taylor stirred from within

Taylor almost looked overwhelmed at times with the 28-year-old's speed as both fighters exchanged tasty shots throughout the fourth, resulting in a cut opening above the Scot's left eye.

But despite the blood trickling down the 30-year-old's cheek, he composed himself to take a foothold in the fight. He came out swinging, landing a strong right hook and another left hand as the end of the fifth neared.

Then, knockdown number one. Within 15 seconds of the sixth round, the Scot sent Ramirez to the canvas with a huge left hand coming over the top. But the American responded impeccably to get back on his feet quickly and smacked a right before the home favourite took another stinging left from the Scot to top an explosive round.

Taylor showed no signs of letting up and looked well in his groove as he earned a second knockdown in the seventh, thundering a shuddering uppercut to Ramirez. This time when he staggered to his feet Taylor aimed to end the fight, but the man scrambling from the canvas was saved by the bell. 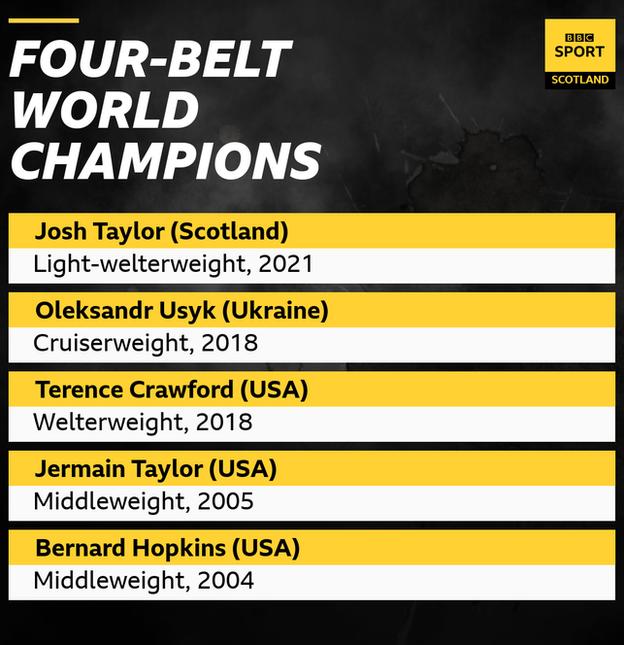 The knockdowns saw Taylor up his levels and cranked him up in the scorecards as the see-sawing encounter shifted in the Scot's favour. He shone again in the eighth with another strong left hand the pick of the bunch.

With the effort both fighters put in early in the bout, fatigue was always likely to impact the occasion at some stage, and that started to become clear as Ramirez tried to gain back some control in the 10th, catching Taylor with a couple of jabs before landing a combination on him late in the round.

Ramirez had to come on strong in the closing rounds to stand a chance of leaving with all four belts, and he admirably drove himself on to jolt his opponent with a left hand in the 11th.

The American gave it his all and showed heart, unloading in the last round as Taylor refused to over commit, protecting his lead to see out an historic win in a fight-of-the-year contender.

Both men raised their hands at the final bell, but it would be Taylor who would be crowned king of the division, becoming Scotland's second undisputed world champion, half a century after his idol Ken Buchanan.

BBC Radio 5 Live boxing pundit Steve Bunce: "It was a great fight. The pair of them showed fantastic skill. Ramirez showed amazing bravery and I think Taylor showed amazing accuracy. More than that we saw pride and desire for 36 minutes. It was a rollercoaster.

"It might not happen again. We might not be standing here in five or 10 years talking about a kid achieving what he has done in 18 fights."

BBC Radio 5 Live boxing commentator Mike Costello: "I mentioned it would be one of the great achievements by any British sportsman or woman in recent years.

"Having seen it tonight, I stand by what I said. The first British fighter in the four-belt era to become an undisputed champion. One of the great performances overseas by a British boxer."

Boxing trainer Joe Gallagher: "Josh Taylor, take a bow son. What a career up until now. What a performance, an unbelievable achievement.

"What he has done tonight, he should be rewarded with all the awards at the end of this year. What a success story."