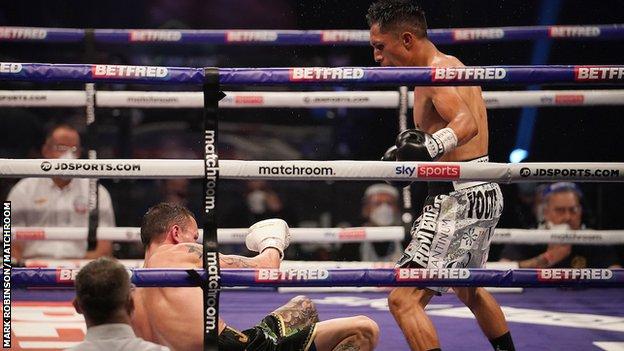 Josh Warrington fell to one of the biggest shock defeats in a British ring in recent years as Mauricio Lara landed a stunning knockout at Wembley Arena.

Mexico's Lara, 22, landed a heavy knockdown in the fourth round and Warrington struggled to make the bell, his legs barely able to support him.

Despite showing grit and trying to find poise, Warrington – a 1-25 betting favourite – was never able to recover.

In the ninth, a barrage of left hooks and a hard left hand wiped him out.

The former IBF world featherweight champion – who had not fought in 16 months and gave up the belt in January to pursue other titles – was left flat on his back and was later taken to hospital for checks after a first career defeat.

"A young man, 22, comes in, no one gave him a chance," said promoter Eddie Hearn, who said Warrington had a rematch option. "I've not seen bravery like I saw from Warrington for a long time.

"He came out, he was erratic, the ring rust showed. He got caught and never recovered. How he got through the fourth I'll never know but he was on empty. The bravery was incredible.

"You have to give Lara tremendous credit. For Warrington it's a crushing blow." 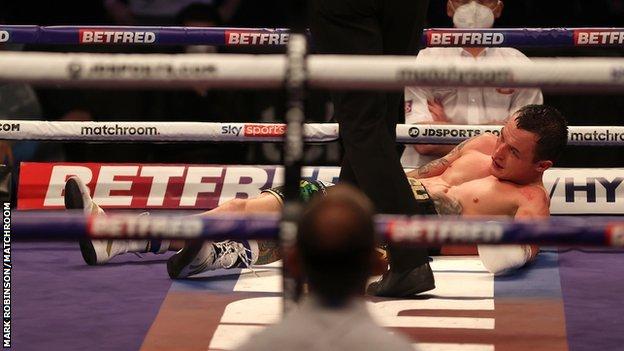 Warrington had never lost in 30 fights before facing Lara

After a reckless opening during which both fighters looked leaky in their defence, it was Warrington who wilted when a left hand dropped him. Though he fought until the bell, had referee Howard Foster stepped in, the former champion could have had no complaints.

"If Josh survives this it's one of the greatest comebacks I've ever seen in a British ring," tweeted former world cruiserweight champion Tony Bellew after round four.

Warrington spent the early part of the fifth in survival mode but seemed fully aware his legs were shaky underneath him and was heard telling his corner his shoulder was in pain when the three minutes were up.

Lara, cut but on the brink of the win of his life, grew in confidence. He was rugged in his approach rather than polished and while he was taking punches himself, he could not miss with the left hook when up close.

He had two defeats in his 23 previous outings but when he took two hard blows in the eighth and yet instantly backed Warrington up with a punch of his own, the greater power he carried and the vulnerability of his opponent was obvious.

A round later it was all over, a right to the body and left to the face sealing a knockout win that will be felt the world over, none more so than in the Lara's boxing-crazed homeland.

"We worked really hard and it worked out how we planned," said Mexico City's Lara. "Our confidence was because we believed we could do it."

Some will ask if Warrington's 16-month spell of inactivity was key, others may question if a fighter who typically enjoys passionate support lost his edge in fan-free surroundings, and there may also be questions as to whether he was looking past his opponent.

Whatever his reasoning, he must pick the bones out of a first defeat in 12 years and 31 professional outings, a loss no-one saw coming.

'He fought his heart out' – analysis 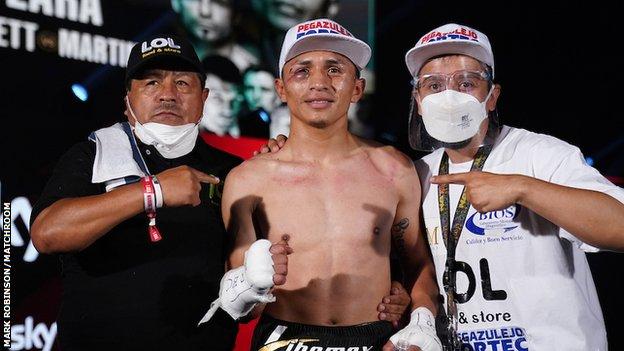 Lara had two defeats from 23 fights before facing Warrington

We have seen one of the biggest upsets in a British ring in recent years. There's an aura of gloom in this very dark arena. We shouldn't forget this was some contest. A first defeat of Warrington's career, but there was a lot there that was inclusive of everything we love about this sport and everything we are so troubled by.

You have to commend how tough and resilient Warrington is. In the end, it was more than the shots, fatigue played its part. That's upset of the year, already, forget about the rest of the months.

What guts Warrington showed in the fifth, sixth and seventh when he didn't know where he was. He was fighting on instinct. He was doing what he knew he had to do, but he had no idea he was doing it.

What they said – was complacency to blame?

Saul ‘Canelo’ Alvarez will fight Billy Joe Saunders in May