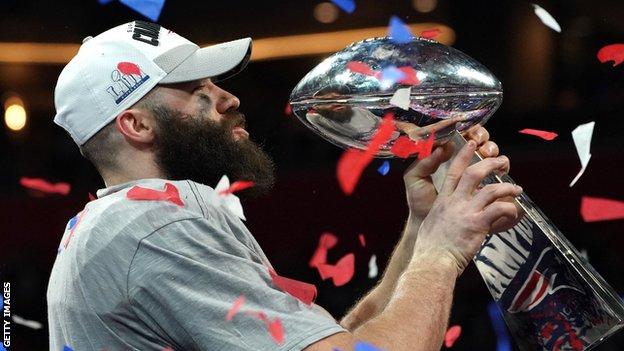 The New England Patriots' Julian Edelman has announced his retirement, saying "the wheels have finally come off" after a number of injuries.

The wide receiver spent 11 years with the side but missed much of the 2020 season after a knee operation.

"I'm honoured and so proud to be retiring as a Patriot," the 34-year-old said in a video on Twitter.

Edelman is one of only seven wide receivers to win the Super Bowl MVP.

He scored the decisive touchdown against the Seattle Seahawks in the 2015 Super Bowl and took the catch that sparked the Patriots' comeback win over the Falcons in 2017.

"Nothing in my career has ever come easy, but this is the right decision for me and my family."

"In the biggest games and moments, with championships at stake, he reached even greater heights and delivered some of his best, most thrilling performances," Belichick added.