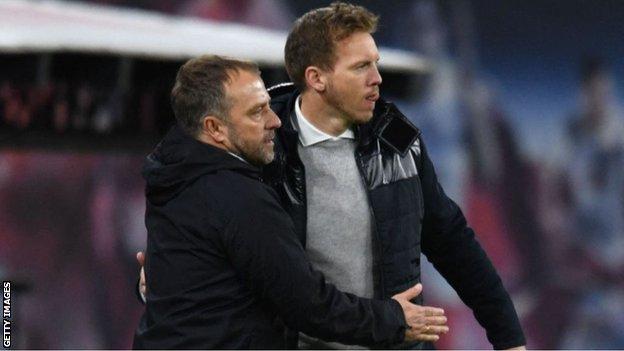 Julian Nagelsmann, who had also been linked to Tottenham, is set to replace Hansi Flick at Bayern

RB Leipzig boss Julian Nagelsmann will join Bayern Munich on a five-year contract at the end of this season, the German champions have announced.

Current boss Hansi Flick had announced his wish to leave the Bavarian club.

At 33, Nagelsmann is one of the most highly-rated young managers in Europe and led Leipzig to a Champions League semi-final last year.

The German will reportedly cost Bayern more than £20m in compensation.

Nagelsmann became the youngest head coach in Bundesliga history, aged 28, when he took charge of Hoffenheim in February 2016.

After moving to Leipzig in 2019, he led them to a third-place finish in the Bundesliga and the semi-finals of the Champions League in his first season.

"I am convinced we will shape the sporting future of FC Bayern very successfully together."

Six trophies and another Bundesliga on the way – why is Flick leaving?

Flick has been heavily linked with the Germany national team job with Joachim Low set to quit after this summer's European Championship.

Initially the assistant manager to Niko Kovac, the 56-year-old took over on an interim basis when the Croatian was sacked in November 2019.

Flick oversaw a stunning upturn in fortunes, winning the Bundesliga, Champions League and German Cup. He was rewarded with a contract until June 2023.

However, the former Bayern midfielder became frustrated with the lack of new signings this season and found himself in a power struggle with sporting director Hasan Salihamidzic.

Bayern are seven points clear of second-placed RB Leipzig as they close on a ninth consecutive Bundesliga title, but Flick's side were knocked out of the Champions League by Paris St-Germain earlier this month.

"He took over our team in a difficult phase in 2019 and then won six titles, the seventh will hopefully follow soon," said Hainer.

"It will always have a place in the history books of FC Bayern."