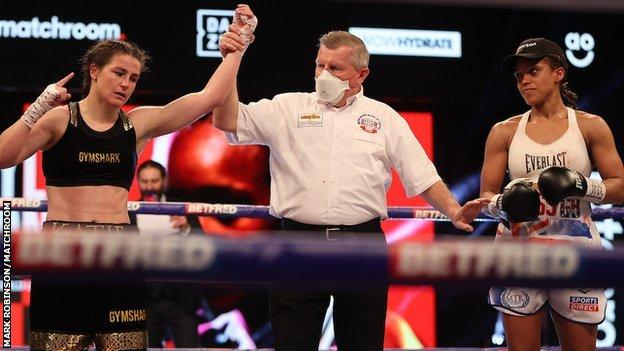 Katie Taylor produced a gutsy late rally to edge a stunning fight with Natasha Jonas and defend her world titles at Manchester Arena.

The Irish fighter started quickly but her four lightweight belts were at risk as Jonas began to land hard shots as the fight progressed.

Jonas showed greater power but Taylor's speed and punch volume were key down the stretch as she won late rounds.

"I had to dig deep near the end and leave it all in there tonight. I think I showed the heart of a champion tonight."

BBC Radio 5 Live boxing analyst Steve Bunce said the pair served up "some greatness" in a bout of such "quality".

While Taylor faced difficulties against the wild and erratic Delfine Persoon, here she came up against a schooled fighter who sought to methodically break her down.

Jonas – beaten by Taylor when they last fought as amateurs at the London 2012 Olympics – likely knew her rival would be too quick for her early on and so it proved.

In the sixth the speed versus power clash played out, Taylor unloading flurries, Jonas drilling home a hard left hand which briefly jolted her rival in a captivating two-minute round.

Many in boxing have questioned why female fighters box 10 two-minute rounds – compared to 12 three-minute segments in the men's game.

This contest – like several other women's fights in recent months – again showed how intense and gripping the action can be under such a structure.

Trainer Joe Gallagher told Jonas Taylor was open for "rich pickings" after a seventh round during which both fighters served up full-blooded attacks.

In the eighth, a left to the body and solid uppercut from Jonas hinted she might hand Taylor a first defeat and secure her first world titles.

But 34-year-old Taylor has proven her heart before and did so again over the final four minutes – her punch count and ferocity unrelenting when it mattered most.

"I feel I belong at this level and I want to win belts and be a champion," said 36-year-old Jonas. "There were rounds I thought I had hurt her, but it's all learning."

Taylor has won Olympic gold, claimed world titles at two weights as a professional and in this – her 18th win in 18 outings – she showed her hunger for glory can stand testing times.

The pair hugged at the bell. Fans may want to see them do it again and Jonas' display more than merits another crack at a world title.

Taylor though is a relentless force and wins like this only serve to add to her already iconic status. 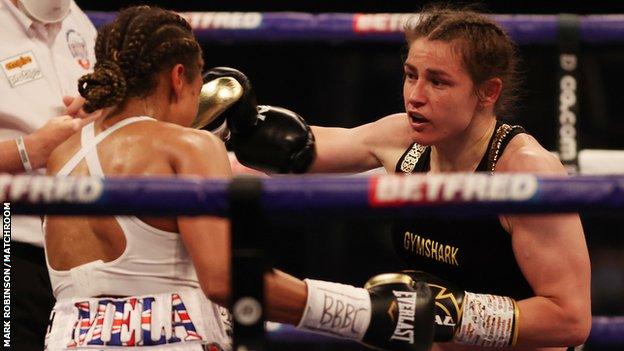 BBC Sport boxing correspondent Mike Costello: "How about a rematch with a crowd? Who wouldn't want to see that again?

"Everyone in the section in front of us is on their feet saluting a tremendous contest, an advertisement for women's boxing and it was so, so close for so much of that contest."

BBC Radio 5 Live boxing analyst Steve Bunce: "Imagine that in front of 20,000 people – when we do our end of year show we might be talking about that 10th round, the last, as the round of the year.

"We've seen some greatness here tonight – we've seen some brilliant women's fights but nothing we've seen in a British ring has had that much quality for that long, 20 minutes of 10 rounds of two minutes and not a moment you couldn't watch and learn from."