Kolkata’s Varun Chakaravarthy and Sandeep Warrier test positive for Covid; the Knight Riders’ game against Royal Challengers Bangalore on Monday postponed; IPL says: “The BCCI and the Kolkata Knight Riders prioritise the health and safety of everyone involved” 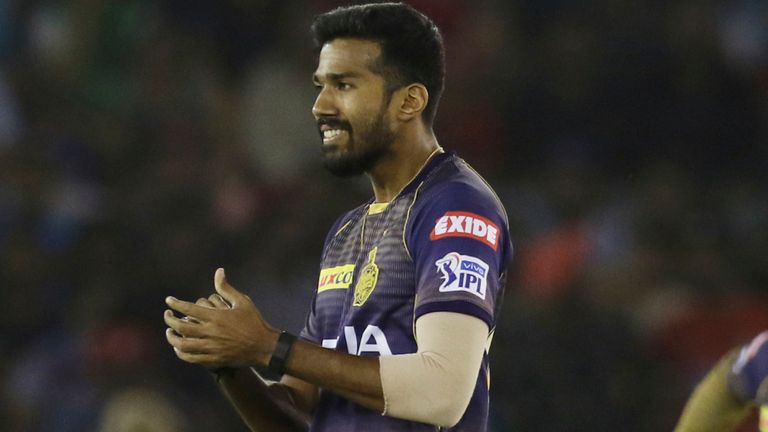 Varun Chakaravarthy and Sandeep Warrier returned positive tests and have isolated themselves from the rest of the Kolkata squad.

The Knight Riders will now begin a daily testing regime in a bid to identify any other possible Covid cases as quickly as possible.

The team will also investigate Chakaravarthy and Warrier’s movements over the previous 48 hours to determine any of their close contacts.

A statement from the IPL on Monday morning read: “The BCCI (Board of Control for Cricket in India) and the Kolkata Knight Riders prioritise the health and safety of everyone involved and all measures are being taken in that endeavour.”

The IPL officially stated that the game – which was due to begin at 3pm (BST) – has been “rescheduled”, but no new date has been provided.

According to reports in India, Chakaravarthy left the tournament’s bio-secure bubble for a shoulder scan, after which the positive cases were reported.

Spin bowler Chakaravarthy has played in all seven of Kolkata’s IPL fixtures this year, taking seven wickets, while fellow bowler Warrier is yet to feature during the current campaign.

A massive surge in Covid cases has placed a huge strain on India’s health system, with a shortage of hospital beds and oxygen supplies, and morgues and crematoriums swamped.

Amid the crisis, the IPL has continued despite fierce criticism on social media. The BCCI has said the IPL will continue as scheduled, with the final in Ahmedabad on May 30.

Cricket Australia and the country’s players union has backed a fundraising drive with charity UNICEF to respond to India’s coronavirus crisis.

Australian cricket’s governing body is making an initial donation of A$50,000 (£27,920), matching a donation made by Australia vice-captain Pat Cummins last week.

“Australians and Indians share a special bond and, for many, our mutual love of cricket is central to that friendship,” Cricket Australia interim chief executive Nick Hockley said in a statement on Monday.

“It has been distressing and saddening to learn of the suffering of so many of our Indian sisters and brothers during the second wave of the coronavirus pandemic and our hearts go out to everyone impacted.”