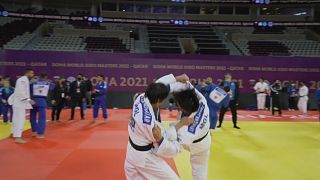 The opening event of the 2021 judo season is underway in Doha: the invitation-only World Masters, where the highest-ranked judokas in each weight category battle it out for top spot.

Our woman of the day is Kosovo’s Distria Krasniqi who faced Japan’s 2017 World Champion Tonaki Funa in the final of the -48kg category. She took gold inside 90 seconds with two waza-aris for a contest-winning waza-ari-awasete-ippon. Krasniqi received her third consecutive Masters title from the General Secretary of the Qatar Olympic Committee, Jassem Rashed Al Bouinin.

I train very hard every day and I have the best coach and the best team. We support each other so much.

“I’m very proud of myself because in every competition I’ve gone to over the last two years I’ve come back home with a medal,” she said. “I’m very happy and of course I train very hard every day and I have the best coach and the best team. We support each other so much.”

Kim is man of the day

Our man of the day was South Korea’s Kim Won Jin – who overcame Yang Yung Wei from Chinese Taipei with a fantastic tani-otoshi to take the -60kg gold, his best result to date. The medals were presented by Husain Al Musallam, Director General & Technical Director of the Olympic Council of Asia.

“From the first contest on I fought a strong opponent,” said Kim afterwards. “The 2019 World Champion. And all of my contests were very tough. I never gave up and did my best to the end, so that I could win.”

At the -66kg level, 2015 World Champion An Baul faced Israel’s Baruch Shmailov and – he secured gold with a drop seoi nage for waza-ari. This was the Korean’s second World Masters title – presented to him by Jean Luc Rouge, General Secretary of the International Judo Federation.

In the under 57 kilos, Japan’s Yoshida Tsukasa met France’s Sarah Leonie Cysique in the final and held down her opponent to victory, flipping the result of their previous contest in the Tokyo World Championships. Habib Sissoko, Vice-President of the International Judo Federation awarded the medals.

Move of the day

Our move of the day was an incredible ippon from Russia’s Albert Oguzov against Tunisia’s Fraj Dhouibi.

What an incredible way to kick off 2021!